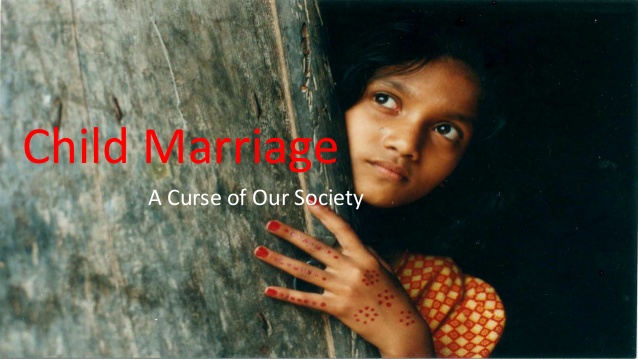 There is no room for argument, that the child marriage epidemic in Bangladesh is a concern for a leader as ambitious as Seikh Hasina, whose leadership is often praised and seen as pivotal for Bangladesh’s success in gender equality and in eradication of poverty.

At the July 2014 Girl Summit in London, she made a commitment for ending child marriage by the year 2041.

Then, soon after the summit, a proposal to lower the age of marriage to 16 from 18 came from her, which was vigorously resisted by the women rights campaigners.

Yet again, on 24th of November 2016 the cabinet chaired by the Prime Minister passed the draft of the “Child Marriage Resistance Act 2016” with a clause that child marriage will be allowed in special circumstances to protect honor.

Before digging further, lets go through the statement made by the Cabinet Secretary Safiul Alam. This will explain the ignorance and idiocracy that were at work while making this policy.

It was reported by several media outlets, quoting the secretary, that often girls as young as 11 gets pregnant in Bangladesh and this provision was created to protect their honor.

Did Mr. Alam think about section 375 of the penal code while speking to the press?

According to Section 375 of the penal code 1860, which is Bangladesh’s jurisdiction for rape, sexual penetration with a girl under 14 is rape.

Bangladeshi Legal provisions do not have so called “Romeo-Juliet” clauses to ease sexual relationship between partners of same age brackets.

Now, If Mr. Alam’s commentary in the official press conference is seen in light of the penal code of Bangladesh, more accurately section 375, one can successfully argue, that he was arguing to legitimize rape and pedophilia.

In many countries such commentary would end career of a man of his position, but luckily, in Bangladesh, high ranking officials operate with an invisible impunity. The word “accountability” does not apply to them, does it?

But that’s not the end of the commentary saga.

The Prime Minister herself blasted the NGOs and gender equality campaigners for opposing the special clause, “ They are far away from reality” arguing that in many western countries marriage of girls as old as 14 or 16 is legally allowed.

Apparently, the Prime Minister is well aware of the reality, which is normal given her life long dedication to Bangladeshi people, and for obvious reasons she then know, that the reality of Bangladesh and the western societies is also “ Far different.”

Contrary to Bangladesh, thanks to their superior financial means, western families do not see the girls as burden. Neither its a societal norm of the west to get the girls married as soon as they reach puberty. Their safety is assured by the state, and most of all, child marriage is not an epidemic there.

The concept of women rights was created by the west and the western parents along with the society protect it for their children. On the other hand, lets be honest, the best metaphor to describe Bangladeshi society and parents in relation to child marriage is: “ Fox guarding the henhouse.”

The Prime Minister’s comparison between Bangladesh and western societies was completely irrelevant.

The “autocratic” and “ know it all” attitude of Bangladeshi lawmakers and bearcats have gone too far.

Before vague criticism, being the Prime Minister, Seikh Hasina needs to identify the common ground between her and the rights campaigners, that is, as like her, the women rights and gender equality campaigners have also dedicated their life and work to Bangladesh and Bangladeshi people. And as the leader of a democracy, it’s her job to include their voices, address their concerns and assure them of a decent hearing.

In any functional democracy when such concern is raised by rights groups, the parliament forms special inquiry committee, acquire expert opinion and put the findings of the inquiry before the parliament for a robust debate.

Its better for the democracy, if the Prime Minister understands, that dispite differences, campaigners like Sultana Kamal or Giti Ara Nasrin are neither her opponent nor enemy. They’re the development partners she must have.

To me, the most disturbing development of this commentary saga was the addition of Mr. Sajib Wazed Joy, whom I adore from the deep of my heart, believing, like many other Bangladeshis, that one day he’ll be the man who’ll lead us out of this era of political wilderness. Honestly speaking, even the slightest rumor of his ascension to leadership excites me.

When a man of his position tries to defend a law quoting the US provisions, it indeed becomes very appealing to people.

Lets dig a little deeper before forming an opinion.

In majority of the states in America the age of consent is between 16 and 17, and being a sexually more open society many states even have lowered it, where the parties are close in age.

But they also have strong statutory rape laws where an adult accused of any type of sexual conduct with a minor will be charged with sexual crime.

Contrary to the US, Bangladesh does not have specific statutory rape provisions of such kind to protect the minors from the sex-predators and the age of consent here is 14.

True, that in many American states young children can get married in special circumstances, but it happens only between partners of same age bracket under the Romeo-Juliet provisions.

On top of that, in many US states, the extreme influence of Evangelical Christianity and their opposition to abortion under any circumstances is an issue, which plays a role in such marriages. I’m certain, that Mr. Joy won’t make an argument on such dangerous ground.

And let’s not forget the “ Fox guarding henhouse” metaphor.

In 2014 a study among 6000 girls in Bangladesh found, 83% of the marriages in Bangladesh were arranged by the parents, of whom 38% were girls married under the age of 15. The study also found in 72% cases the reason for such marriage was, that the parents felt it was too good a proposal to refuse.

Bangladesh tops the world ranking in child marriage, when it’s about the marriage of girls under the age of 15, even worse 2% of our girls get married as young as 11.

Can anyone fit this scenario into American child marriage scenario?

Here is the hypocrisy in Bangladesh: the government in one hand, commits to end child marriage by setting the minimum marriage age for girls 18, where the age of consent is 14, and then argues it is all right for a girl under the age of 18 to get married in the name of honor.

And in absence of clear provisions of statutory rape, as it is indicated by the cabinet secretary, in the name of honor, an adult can now escape the rape charge if a minor gets pregnant because of sexual intercourse, let alone the parents abusing the provision.

This so called societal norm “honor” is the reason why only 2% of the total rapes committed in Bangladesh get reported, and now this would get legitimized.

Well, before I finish, this is my question to Mr. Sajib Wazed Joy, would you also consider advocating for other issues quoting from the American legal provisions, lets say, free speech, more importantly, section 57 of the ICT Act 2006?