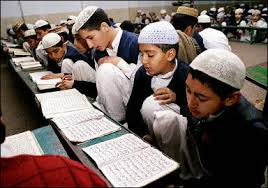 Like every other Bangladeshi kid, I also had to study Islamic religion throughout my high school years while my Hindu friends were studying Hindu religion. The Christian boy of the class Bobby Di Costa was the only exception as the school didn’t have a Christian teacher.

During that 45 minutes of religious education the students of our class were separated between Hindus and Muslims and taken to different locations while Bobby was made to sit in the corner alone, disallowed from participation, or often made to sit outside under the sun. But, it was even worse for Setu, whose family practiced Qadiani Muslim tradition. He had to learn Sunni Muslim belief as he couldn’t disclose his religious affiliation in public.

Back then, I really felt sorry for Bobby, but now after this many years, I have finally come to realize, that Bobby was, in fact, one hell of a lucky lad. He never had to learn intolerance, religious superiority or sexual discrimination in his early childhood. He, unlike us, was free to believe in the theory of evolution as the school Maulana taught us, that those who believe in evolution instead of creationism are sinners and damned.

However, Bobby and Setu raise a serious concern about a fundamental aspect of the country’s public education system, that, irrespective of race, religion or sex, being a liberal democracy, Bangladesh is obliged to facilitate equal opportunity for every citizen of the country. The size of the population is completely irrelevant in this debate.

It is only a natural expectation from a country such as Bangladesh, that claims to be a liberal democratic state, to protect individual rights when it provides services as fundamental as education. It should be done in a manner, that does not discriminate among the citizens based on race, religion, gender or size of the population. Even a very small group of the population such as Christians, Santals or Qadianis are rightfully entitled to be treated as equally as the majority Muslims.

Evaluating the long years of my religious studies, it was disturbing for me to realize, that apart from divisiveness and terms as derogatory as Kafir, Murtad, Mushrik, in my early childhood, I was also taught by the state that my Hindu friends and neighbours were to be punished in the hell for eternity, just because their elegance belong to a God different than mine, or just because they pray differently.

Bangladesh is a diverse and multicultural society, an assembly of over 45 ethnic groups and multiple religions.

This was supposed to be a matter of national pride, but instead, little too often, the reports of violence inflicted by religious hatred indicates a society in deep crisis.

In times of crisis like this when the society is literally on the verge of a collapse, as a sensible nation it is Bangladesh’s duty to scrutinize and investigate its actions thoroughly.

And doing so, many would agree, that the way religion is taught to Bangladeshi kids is playing a part in this crisis.

The advocates of secularism would have reasons to believe, that the state must not promote any religion in any manner and religious education should not be funded by the state. But, However, from a realistic point of view, It can be understood that it is too much to ask from a society as conservative as Bangladesh.

But, considering the recent tension and communal hate crimes, can Bangladesh at least try a more progressive approach to this?

Realizing, that, education is an opportunity and schools should become a place for enlightenment not ignorance, scholars from around the world are now arguing, that, in order to generate advanced level of inter-faith awareness, respect, understanding and social inclusiveness, young students in school must learn diverse religion instead of a single faith.

More preciously, in order to engage with people in a society as diverse as Bangladesh, people should learn to be respectful and tolerant from a very young age by seeing life from the perspective of others.

If we believe, that the true purpose of school education, as it is accepted universally, is to develop a child’s ability to understand critical issues and to prepare them for the challenges lies ahead, then we must also acknowledge, that it can only be done by encouraging them to ask for reasons instead of forcing them to accept views uncritically.

Thus, for the benefit of the future generation, it is a matter of outmost importance for Bangladesh to design an ethics and religion based religious education program.

In other words, a multi faith, non-confessional carefully designed program for all students that will allow the pupils to critically discuss diverse religion and ethics related issues without creating harm to those with whom they disagree.

Bangladeshi society just can not afford to bury its head in the sand like an Ostrich and ignore the new world views as this is not just about religion and social harmony, its also about the country’s economic future.

In order to become successful in this era of interconnected global economies, the kids needed to be prepared in the best possible way.

They can not be taught, believing in evolution is a sin. One religion is superior than other. Their friends from different faith are to be punished in the hell. Women are weak, thus be protected by the male. Homosexuality is a punishable crime.

Feeding a child with ignorance and views that are contrary to universally accepted democratic principles such as inclusiveness, pluralism and respect is very problematic, in fact, its a violation of child rights.

The children are the key to Bangladesh’s future success. They must be prepared in a way, that effectively allows them to connect with people from diverse background and views to be able to achieve the desired outcome.

In the near future, India, China, South-East Asia as well as Western countries would become the largest stakeholders of Bangladeshi economy. The Bangladeshi kids will be going there and they’ll come to Bangladesh. Having that in mind, Bangladesh needs to create an education system that promotes 21st century values- peace, harmony, tolerance, social justice, science, technology and effectively makes her a part of the extensive world community.

Bangladesh can not have both a 21st Century economy and a medieval era religious education system. The sooner the Bangladeshi society realizes this, the better for the country.

Bangladesh: Do not legitimize Paedophilia