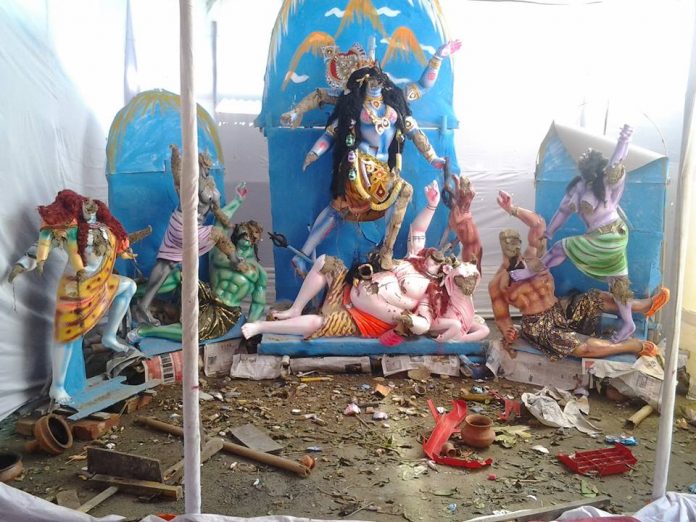 In Bangladesh, a day hardly goes by without some news of gigantic injustice.

If it isn’t little Puja screaming of unbearable pain, then it’s Tonu’s family crying out for justice. If it isn’t a Hindu village tormented by fear, day after day, then it’s a syndicate of powerful criminals, backed by the state machinery, killing the Santals in Gobindaganj.

What happened to the country where once love, compassion, and humanity genuinely mattered, where Hindus and Muslims fought side by side, sacrificing their lives by the thousands?

Is this the time to say “rest in peace, humanity” in Bangladesh?

Soon after the attack on Hindu communities in Nasirnagar, just out of curiosity, I went on Google and searched for “Minority + Bangladesh.”

And contrary to the pre-conceived picture of a glorious Bangladesh we paint in our national anthem, those were real stories of real people.

It takes decades, or perhaps hundreds of years of skilful hard work to create a society as vibrant and colourful as Nasirnagar, and all of a sudden, in the name of religion, a few hours of evil deeds destroy it all — the bondage of fellowship, culture, and not to mention human spirit.

Such action is anathema to the very logic religious authorities often aggressively present whenever they struggle to confront rationality, which is that religious adherence includes community, charity, and comfort in times of difficulty.

I can successfully argue that those products can be acquired from elsewhere, more importantly, in ways that actually allow human beings to wield greater strength without propagation of hoax, but, being a humanist, religion-bashing is not on my agenda, especially at a time when Bangladesh desperately seeks love and unity.

While accepting that Bangladeshi society often has an unhealthy attachment with religion, it was surely never to be the case that religious identity should come before humanity. This has been the reason for many an atrocity.

Apparently, partly due to the rise of the extreme ideologies and partly because of political misdeeds, this is the point Bangladeshi society is missing today: Islam or Hinduism like all other religions are just ideas, but those who follow them are human beings, our fellow countrymen.

Things like literature are not flesh and blood — they cannot be hurt or insulted. But humans, on the other hand, are living beings. They bleed and feel. Humans have rights and that are to be respected.

Not so long ago, this human perspective actually had a place in Bangladesh, which seemingly now is almost lost.

Although, every now and then, we hear words and promises on the pretence of caring, as they sound socially more acceptable, but in practice, no tangible action ever follows the speeches.

It is actually, to be honest, quite interesting to see that religious conservativeness accompanied by extreme fundamentalism is on the rise in Bangladesh at a time when religious beliefs are in decline all over the democratic world.

But that surely does not mean hope is lost. The vast majority of the devotees in our country are also reasonable human beings, and they really care about the country, and mostly about human civilisation and its future.

All we need is a common understanding. This era of darkness needs an immediate end. The sooner the better.

One’s right to religion is a well-established human right which deserves to be protected, but it needs to be practiced in accordance with the principles of humanity, that is, one group must not abuse the rights of the others.

It is high time for Bangladesh to rise above the petty issue of communal differences.

Our people are craving for love and we must respond.

10 things you cannot miss at FUSS

An etymological explanation of the Bengali’s extreme Food-Fetish

Zerin M. Firoze – Journey of a Bangladeshi Woman from Islam to Atheism