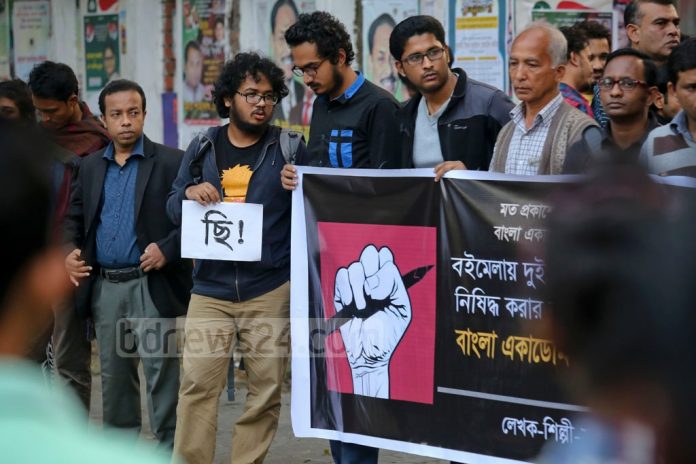 In one of the most despicable attempts to restrict free expression to be seen in recent times, Bangla Academy has tried to impose a two-year ban on “Srabon Prokashoni,” a secular publishing house.

The grounds for the sanction, as it was understood from media reports, was that Robin Ahsan, the owner of the entity went to express solidarity with writers and activists defending rights to free speech, life, and liberty.

Even though, because of public outrage, the sanction has been lifted, this issue still carries monumental significance, as it presents a worrisome trajectory of our current social and political state.

Concerning the very institute that represents the brightest and the finest minds of the nation — poets, authors, philosophers, academic, and cultural researchers — it sends a clear signal about the widespread root of anti-intellectualism and fundamentalism in every sphere of the country,

Many, after the incident, were quick to blame the DG and the executive council of the academy, but the truth is, neither the DG nor the council are entirely to be blamed. They’re merely a few dots of a bigger picture.

The difficulties Bangladesh faces today — corruption, injustice, inequality, deficit of ideas, lack of freedom and liberty — are all connected to a singular flashpoint.

That is in the last few decades, partly due to the rise of the religious hard right, and partly because of political surrender to them, our society has become extremely anti-intellectual.

This trend marks the dismissal of  knowledge, arts, culture, history, and their replacement by ignorance and fundamentalism — a hallmark characteristic of the religious right.

In my early days of encounter with secular Western culture, it was a surprise seeing people reading books in the train, park, coffee shop, and even in the pub.

Later, I found that many among my newly made friends belong to small friendly circles of book clubs and study circles where, besides intellectual work, they discuss social and political issues that concern them.

They do so in a fun way like a pub trivia about philosophy or literature, lazy Sunday breakfast, sunshine in the park, or at the beach.

Becoming a member of a few of those circles didn’t just allow me to make great friends, but also answered a question that had puzzled me for many years: How do our governments get away with appointments of people with less knowledge without any citizen resistance in key policy positions (when there are better candidates)?

For example, the appointments of vice-chancellors of the most public universities or key research and academic institutes like Bangla Academy, where the same DG has been working for the past nine years.

This allows the governments to appoint candidates with less credentials on the basis of political affiliation, who later serve as pawns of the government and maintain silence in the events of political and social misdeeds including corruption, injustice, and fundamentalism.

Then there is the new addition: The threats, violence, killings of intellectuals by the religious hard right, and sanctions by the state.

To have an idea about the proximity of this particular concern, I advise you to go on to BBC Bangla’s Facebook page and watch blogger and young author Maruf Rosul’s recent interview.

On the comment sections, you’ll find endless anti-intellectual commentary, including threats to behead him or end his life.

For a generation of young writers like Maruf and our network of friends, in the last few years, threats are an everyday part of life and killings by Islamists is a reality. We’ve learned to live with the fear of being killed.

What surprises me is that despite those threats being made from identifiable profiles, no action was taken by the law enforcement agencies, as if it is perfectly normal to threaten intellectuals or those who dare to think differently.

Brutality against intellectuals by the religious right is not a new phenomenon.

Fundamentalism always had a tendency of opposing different worldview and responding with brutality. History has marked it since the killing of the philosopher and scientist Hypatia 1700 years ago.

Bangladesh has also seen it in 1971 at the very end of our liberation struggle when the intellectuals who helped us shape our secular identity were killed by the Jamaat; and also in recent years, which has been marked by the killings of intellectuals like Professor Humayun Azad, Professor Rezaul Karim, author Avijit Roy, publisher Faisal Arefin Dipan, and other bloggers.

But it surprises me when our government complies with them by imposing restriction and sanction on knowledge in the name of faith.

Salman Rushdie once said that publishers and writers are not warriors, we have no tanks. But it falls to us to hold the line; literature may be weak because it has no real power in the world, but in a way it is the grandest narrative of all, in that it puts ourselves into question with fiction.

We challenge ourselves and refuse to take the world as a given. We challenge all opinion, all appeasements, all fears. Literature is the unafraid form.

The fact is, whether you accept it or not, the brightest minds will always have conflict with faith as it is their job to question and to establish the truth.

That’s the way it is. Einstein, Darwin, Copernicus, Hawking, Freud, Rousseau, Voltaire, Russell, all had this issue with faith.

The question is, should we now stop reading, teaching, or publishing their work and become a nation of illiterate people?

Despite visible similarities, the difference between us and other cultures of this part of the world is that unlike others, the core values of our culture are akin to a cult of intelligence which allowed Bengali intellectuals in the past to deliver social reforms like the marriage of widows, education, and empowerment of women.

That superior intelligence is apparently now at a clinically dead state due to the infection of a fungus named fundamentalism that needs an immediate cure.

Now, here is a proposition for our policy-makers before, in the name of faith, they plan to “dumb down” this nation even more: Should we have a country, like in the Middle East, where, despite resourcefulness and wealth, the lives of citizens have become a living hell, or one like a European country where there is peace, harmony, and financial wealth for all citizen.

A Travel Story: An Ode to Bengal