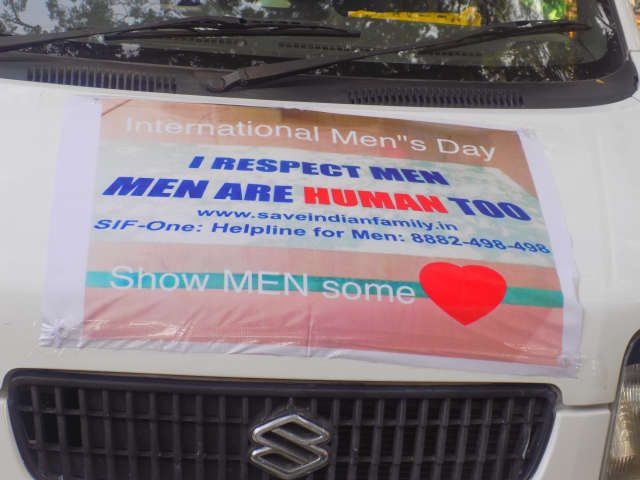 It was like any other day as I turned my laptop on and started checking the mails of the day without expecting anything other than work mails. As I started discarding all the promotional mails as usual, my eyes got stuck to a mail from a personal email address. As I read through the mail and re-read again to make sure that I have read it right, it become obvious to me that it is an invitation to witness a car rally celebrating International men’s day. If not anything, curiosity drove me to find out more and eventually go to the event the following day, that is on 19th November.

So what is Men’s day? Days dedicated to women, children, even fathers in particular are something we all are familiar with but a day dedicated to men in general? It was new to me and from what followed afterwards through the day, it was apparent that the event is new to a lot of people all over the city. While the world have witnessed fickle calls for an official men’s day since the 1960s, it formally came into being in 1992 , 7th February, inaugurated by Thomas Oaster. Eventually the Date was set to 19th November all over the world.

In Kolkata, the event was being celebrated through a car rally organized by Hridaya- a NGO which focuses on improving the gender equality standards and they have been organizing this program since 2007. The car rally was scheduled to start from Kolkata Press club at 2 p.m. and after passing through significant regions like park circus, and landmarks like Science City and Ruby Hospital finally ended in Golf Green at 5 pm. The main agenda of the car rally was to make people aware of the day and how men too can seek help in distress and need to be vocal of their rights too.

In a strictly patriarchal country, the notion of distressed men is alien. Women empowerment is essential but one cannot completely discard that laws that are designed to help women are also often being misused. Patriarchy today gives women rights through reservations and with laws in their favor, perhaps in an attempt to be acknowledged as tolerant further aggravating the divide and inequality between the sexes. The celebration of this particular day focus on bringing about a change in the biased laws where the woman have every power to lodge complaints of sexual harassment, domestic violence, dowry troubles and rape. On the other hand, men complaining of domestic violence, and even sexual harassment is looked down upon. After all, the stereotype about men is that they have to be tough against all odds. Yet, in reality, men too have their share of troubles but the difference in the situations is that they do not have any law to back them up.

As I spent the three hours interacting with several members of the NGO, a thought recurred in my mind that, patriarchal society not only victimize their daughters but also their sons in a manner that is even more exploitative. I came across one such man who have been granted the legal custody for his child but is still not allowed to meet his daughter by his wife. Another man was a victim of acid attack. The men are passionate about the cause and at some point I cannot deny, the demands are just. Upholding the rights of one sex with the logic of empowerment hardly justify depriving the other of legal faculties completely. True empowerment is possible only when truly equal rights are delivered.