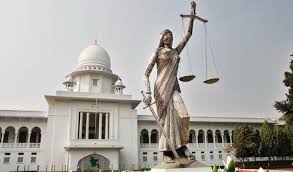 If anyone wonders, despite recent drastic actions against Islamic militancy, why Bangladesh has been ineffective in curbing Islamic extremism- the removal, or because of it’s symbolic significance some may rightfully argue destruction, of Justicia’s sculpture from the High Court will certainly provide an objective answer.

In the name of demanding that the sculpture to be removed from the High Court, it brought together violent-totalitarian Islamists, opportunist thugs, and political interests. And because of the latter the sculpture that for a while became the icon of our nation’s progressiveness and secularism now has fallen.

The Islamist’s hatred against art, culture, and literature is a political strategy which has been described by experts as part of a broader cultural terrorism, where the target is not people but an idea, and this particular aspect of terrorism is seen all over the Islamic world- in Saudi Arabia, Afghanistan, Mali, Syria, and of course in Bangladesh.

Waging hatred against the celebration of Bengali new year, destructing Baul or Duronto Sishu sculpture, vandalizing places of worship of different faith, changing school education curricula, and threatening and killing of the writers, bloggers, critics, activists and foreigners are the same form of terrorism, attacking not just individuals, but ideas and cultural symbols that make us think about human existence and create a civilized society.

It’s actually a signature terrorist trend to oppose and to oppress all those human creations that represent freedom, openness and challenge their idea of totalitarianism.

Although, the demand of removing Justicia’s sculpture was claimed and argued on a Islamic standard iconoclastic ground, that in a Muslim majority country the image of an idol can not be tolerated, which in fact is the same argument often made by the same zealots after destruction of Hindu temples in Bangladesh, in reality it is actually a political provocation aimed to create social unrest.

Similar to their ideological global counterparts such as ISIS, Al-Sabab, Al-Quieda the Islamic fundamentalists in Bangladesh also relish their reputation for violence, threats and brutality. Preaching, and promotion of hate crimes is the center tenet and signature characteristic of their political strategy which Bangladesh has witnessed many times in the past and also recently.

And apparently, Bangladesh’s spineless political leaders have once again allowed the extremist outfits to seize the momentum and ferment religious hatred against the nation’s forging secular progressive values which now is culminating in a greater demand of removal of all sculptures from the country.

And according to reports, threats of destruction and nationwide unrest in support of the demand have already been made.

For Awami League to be aware- if this brings them to sense- that it also means destruction of sculptures of father of the nation Bongobondhu Seikh Mujibor Rahman, if not today then in the near future under the supervision of another government and under same ground.

Hundreds of heritage sites, shrines, monuments and sculptures commemorating the sacrifices made by our ancestors in 52, 66, 69, 71, 75, 90 are the crucial part of Bangladesh’s cultural legacy, which, if their new demand and past history of violence are to be taken seriously, at this point are under enormous threat.

The strong men of the Islamist fundamentalist outfits- those who do not accept the authority of the constitution of the Peoples republic of Bangladesh, have threatened and still acting to replace it with Shariah Law by proclamation of creating a Shariah based Taliban alike state in public- made it very clear in the last few weeks in their statements.

The sculptures and monuments are not the only thorn in the Bangladeshi Islamist’s corner. They also emulates mental trauma and terror on other aspects just like Taliban and ISIS.

These are the people instrumental behind the recent atrocities against Hindu religious group in various part of the country. Even just a few days ago during Justicia affair it has been reported by credible media outlets, that in public threats of atrocities and violence against Hindu communities were made, if the sculpture is not removed. And as usual those threats of violence were ignored by law enforcers as a part of the unofficial impunity package for the Islamist.

Apart from the fall of Justicia, the worst development of this saga is probably, that even in this arc of destruction, in a bid to score cheap short term political capital senior level spokespersons from the both major parties Awami League and BNP have come out to downplay the threats of Islamic radicalism.

As our consecutive governments and major political parties have failed or unwilling to confront, preciously since the killing of the Father of the nation Bongobondhu Seikh Mujibor Rahman, these notorious elements of Bangladeshi politics are now flourishing like mushrooms. And this is the exact cause for the alarming growth of religious extremism, intolerance, and hate crimes in the country.

None in Bangladesh now, whether it is politicians or the leaders of the civil or cultural society dares draw a line and points out religiously inflicted hate violence for what it is, let alone measures to bring the criminals to book or to stop them.

The government lead by Awami League should not have forgotten that defending an action by playing Muslim majority card is an insult to the very people who they represent as a party. The Bangladeshi people has proven it time and time again, that maintaining our own secular culture and values that make us civil are no less important than faith, otherwise Awami League which at least in papers known as a secularist left wing political party would never have had the privilege of forming a government.