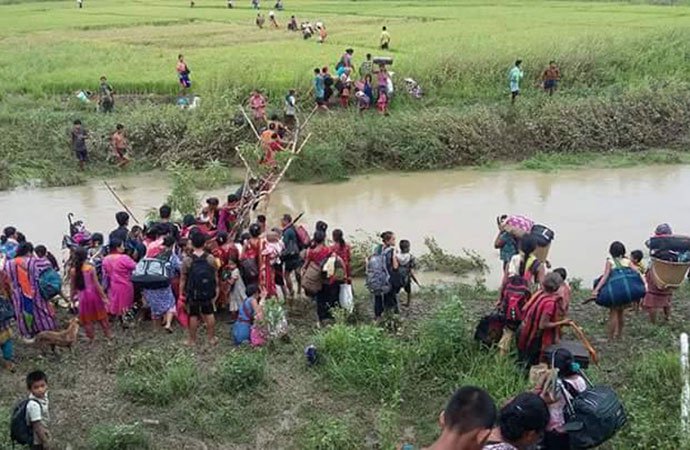 Peace is still a far cry in the hill tracts

The gruesome images of the indigenous people of Langadu upazila, Rangamati fleeing home, carrying whatever belongings they could save, shows that if you happen to be a member of the indigenous community, calling Bangladesh home, your life has not changed even in the slightest since the dark days of our military dictatorship.

Days when the ethnic people of the hill tracts were considered an obstacle to Bangladesh’s economic and social progress; and their homes and land were open to the Bengali majority to grab.

The inhumane persecution of the Jumma people by Bengalis — which was supported directly by military and state machinery in the 80s — was reported by many national and international human rights groups as crimes against humanity, and a stain on the history of our nation.

A tale of suffering

In my 20s, I was privileged enough to become friends with a few of my fellow indigenous students, which led to a visit to villages in the hills where their families resided.

In that short visit, I couldn’t hold back tears hearing about the sufferings of a refugee in India — and how their hearts were broken when their dreams never came to be reality.

Still today, after so many years of the treaty, from the injustice and negligence, it seems that the Bangladeshi state has not yet stopped treating them as the unwanted people, as a threat to peace and stability of the nation.

And there is nothing to say about ensuring an effective process of reconciliation to make amends regarding the injustice that was carried out against them.

We have failed to make them believe in a nation that is equal for all, and this is again proven through the latest Langadu atrocity.

Most Awami League supporters (which also includes myself) once strongly believed that Prime Minister Sheikh Hasina deserved a Nobel Peace Prize for the signed peace treaty to protect the rights of the hill people during the first term of her government.

However, in reality, this government is no different than any other Bangladeshi government regarding the rights of the ethnic people of the hill tracts, as the colonial-style dominance of the majority over the minority ethnic groups still continues in full force.

Displacement of homes, killings, and other despicable acts are still part of daily life for the people in the hills.

The battle that the Jumma people and all other tribal groups of our land are fighting (just think about the recent injustice against Santals in Govbindaganj) is one for rule of law and justice, which has been guaranteed to them by the Constitution of Bangladesh and the UN declaration on the rights of the indigenous people.

Talking about the latter, it must not be forgotten — which gives an idea about Bangladesh’s willingness to confront injustice against indigenous people — that Bangladesh was, in fact, one of the 13 nations which were not present at the UN general assembly when the declaration was passed.

This mindset has to change, as Bangladesh was meant to be an inclusive nation from its very birth.

The shameful violence that has taken place in Langadu could have been prevented easily, if the authorities and our law enforcement agencies had taken timely action.

A few years ago, Amnesty International reported that the failure to prevent these clashes suggests Bangladeshi authorities aren’t following through on their responsibility to uphold the peace accord and prevent further escalation of violence on indigenous lands.

And apparently nothing has changed and no lessons have been learned from the previous atrocities and criticism, as this report still seems relevant after the Langadu incident.

What about the peace accord?

One does not have to be an academic to understand that the conflict and injustice regarding the ethnic people of the hill is a direct consequence of land dispute.

On which the indigenous people have a rightful claim, even according to the 1997 CHT Peace Accord.

As Bangladesh was never meant to be a country for a particular religion or race.

It is probably not too late for our policy-makers to seriously consider fulfilling the promises made to the Jumma people in line with the 1997 treaty.

We must concentrate on building a civilised, inclusive society to uphold the values of our constitution, which means equality, justice, and zero tolerance towards violent crimes such as what happened at Langadu.