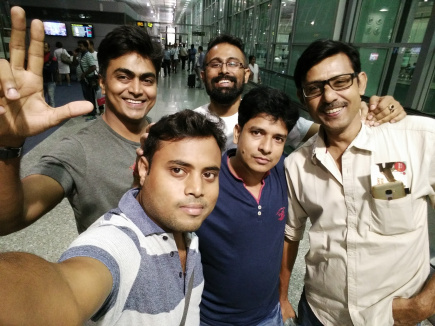 It is definitely the sign of the times we live in that when anyone declares that they are off on a vacation to Thailand- various images are conjured up in our minds. One quick evaluation of those images will reveal the stereotyping of a nation, (not without some reason though) and a pretty limited mind-set about what holidaying in Thailand means.
But it is also the truth that your experience of a place is determined by the kind of traveller you are- you see what you want to see, you get the answers for which you have put out questions into the universe.
Calcutta Walks went for its annual team vacation to Thailand between 3rd and 10th May and brought back a richer experience of a country, its people and its heritage.
The team of 5 – including explorers Ifte, Ritwick, Ramanuj,Anirban and Binod visited three destinations (Bangkok, Ayutha and Chiang Mai) and brought back a refreshingly new perspective of Siam or Thailand.

Using every mode of transport- be by it road or water, the team savoured this ancient land, which has much to offer to the discerning explorer. Staying from the regular hostels to the poshtels, the five commended the way the country has imbued the spirit of aesthetics, sustainability in its tourism friendly environment.

Highly recommended by them is the tasting of the local street food, a visual delight with distinct tastes of sea food and pork. The lingering tastes of caviar lime and dried red chilly in the food with a distinct combination of sweet and saltiness is really delectable.

What intrigued our band of explorers is the efficiency with which the garbage and waste is recycled. For a nation that spews out so much of plastic and waste, there is no visible sign of the garbage. Much of it is recycled and the public spaces are incredibly clean.

In fact, the effective manner in which public spaces like the space under flyovers or the areas next to the malls, are utilised, definitely are worthy of emulation.There are open gyms where anyone can just step in exercise, play or even participate in Zumba classes. There is a culture of exercising that is taken rather seriously by all Thai people.
Also commendable is the way in which the nation encourages cycling as a means of transport. There is space to cycle the length and breadth of the nation. That says much about the well planned transport system in the country.

Humility and simplicity, along with an inherent sense of aesthetics are part of the national character of this nation.

The people are extremely hard working and possess no lopsided notion of values. Women form a major part of the workforce and there seems to be a focus on their meaningful empowerment.

An interesting way to travel in Thailand would be to take the canal system, crisscrossing the cities. Canals or Khlongs as they are called, were constructed to protect the borders from the regular skirmishes between Siam and Burma. They are not only effective routes to take but they also come with their floating flower markets and shopping opportunities. It is a great way to know a city and and its people.

Besides Bangkok, the team stopped at Ayutha which was the ancient capital of Siam. The temples here, comprising different manifestations of Buddha, are open 24*7 to the public. They are carefully preserved sites and have miraculously maintained their aura of peace and tranquility.

Defying the stories in Hindu mythology about Brahma cursed for his inappropriate conduct, there are numerous temples dedicated to Brahma in Chiang Mai. Interestingly, the Brahma depicted is a man without his regular flowing beard. The influence of Buddhism is seen in the form of this representative from the Hindu trinity.

There were also opportunities for some adventure sports- like ziplining that made this trip real fun.

While Explorer Ifte commended the innate sense of aesthetics in the people and environment, Explorer Anirban opines that the people of Thailand is its greatest asset. Explorer Ramanuj summed up his experience in the words of our former President APJ Kalam-

For a tourist destination known for it sex-tourism and its exotic by the sea experiences, Thailand has more secrets to discover if you are the willing explorer. This team holiday sure turned out to be an enriching experience of the real sights, sounds and tastes of a country, which has a lot to offer.