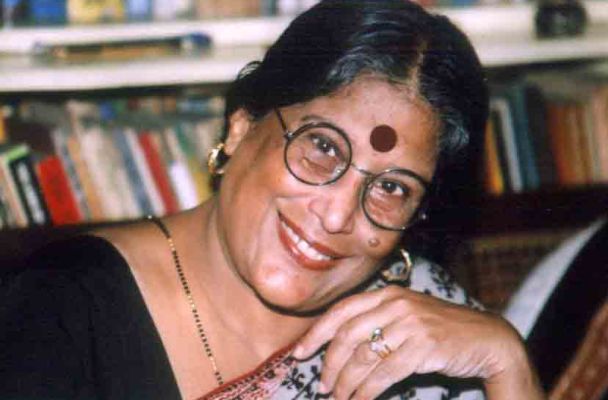 Bengali literature of the post-independence era has most certainly come a long way where women authors have shaped the world in their fiction in a unique and remarkable mold. In the male-dominated fiction that ruled Bengali novels for a long time, women had been extolled for their beauty and vision, the greatness of their unflinching love and sacrifice. However, there have been a handful of women authors in Bengali, especially post-Ashapoorna Devi, who will be remembered for their unconventional stance, their intense, flawless depiction of humanity and the feisty expressions of feminism in their writing.

Nabanita Dev Sen, the noted poet, novelist, short story writer, playwright, humorist and travel writer is unquestionably one of those accomplished women authors of contemporary Bengal. Her refined humor, free-spirited, erudite writing and deep understanding of the post-colonial social and psychological problems of middle-class Bengalis have accorded her with a special place in contemporary Bengali literature.

Born to the accomplished literary parents, the poet couple Narendra Dev and Radharani Devi, Nabanita, the name she received from none other than the bard, Rabindranath Tagore, has been a literary gift in itself. While her vast array of poems, fiction and non-fiction work is remembered for being spontaneous, unique in expression, originating out of her vast, varied life experiences, her readers are also enriched by her wide body of scholarship that characterizes her writings.

An internationally renowned literary icon for women, Nabanita has been a professor at the Jadavpur University in Kolkata, the founder secretary of the Indian National Comparative Literature Association, a visiting professor and creative writer in several universities in the United States, including prominent names like Harvard, Cornell, Rutgers, Columbia, Smith College, and Chicago. She has also graced a number of distinguished artists’ colonies all over the globe. An artiste par excellence, her journey, starting with her first collections of poems, Prothom Pratyay, published in 1959 to her critical works, Ami, Anupam (1978), Seeta Theke Shuru (1996), Nati Nabanita (1983), NabaNee Nirbachita Rachana Sankalan (1996), Jara Hatke ebong Ananya (2000) has come full circle with myriad milestones of literary accomplishments. These include distinguished international awards, honors and felicitations like the Celli Award from the Rockefeller Foundation in 1993, Sahitya Academy Award in 1999, Padmashri, the fourth highest civilian award in 2000, and the Bharatiya Bhasha Parishad Award.

Nabanita’s journey into writing as a feminist author and storyteller

In the article, “Creation and Femininity—An Act of Incompatibility”, published in the collection Feminism in Indian Writing in English, Dr. N. Sharada Iyer looks critically into the early roots of feminist writing that had originated from male domination, gender discrimination and the retributive attitude of the patriarchal society. Dr. Iyer has analyzed how Ashapoorna Devi’s writings focusing on the revival of reformed, emancipated, traditional women emerged from the need and urgency to assert themselves with their independence and also with their emancipated solidarity. In a culture that is essentially controlled, censored and organized by men, it has been a cultural and intellectual struggle for women authors to create a literary niche for themselves that were considered anything beyond “trivial and private” (64).

In essence, Ashapoorna Devi and her immediate successors, most prominently Mahasweta Devi, were among the first women to render the feminine experience in Bengali literature. Their writings originated from a profound sense of marginality and distance, to develop a universal, self-defined role for woman that had a meaningful impact both within their homes, families and in the greater world where they found themselves. While class, gender and the effects of post-colonialism feature in a large part in Mahasweta Devi’s writings, the desire and the fervent appeal to create and sustain a new social order for women to express themselves was born with a sense of knowledge and self-realization.

Nabanita’s work, starting from her first collection of poems,  Prothom Pratyay, to her wide variety of novels, short stories, personal essays and humor writings originated from this spirit of knowledge and self-expression, while she chose to reflect on the social, political, psychological problems of the post-colonial, middle-class Bengalis, often using women as central characters. To a great extent, her literary creations, including her most notable works, Bama-bodhini, Nati Nabanita, and Seeta Theke Shuru have been written from her need and urgency to demonstrate her presence within the parameters of patriarchy, to construct a world where women question the myths of creativity and also assert and validate themselves as inspirations, complementing men in all their psychological, intellectual complexities.

In a society where her journey as a woman author starts out of this particular quest and assertion, her subversive, spirited voice also comes across in her keynote speech at the National Colloquium of women writers held in Hyderabad: “We consider ourselves free spirits, but our words remain unfree. Women are late comers to writing and unwelcome.” These are the words of intense, deep-rooted angst that shapes both her life and works as a true, undaunted feminist, who has fought and earned her literary distinction in the midst of the towering presence of the contemporary male literary figures in Bengali.

An analysis of her works also illustrates that though they are born out of an essentially feminist spirit, they are not overtly propagandist, as Nabanita, as an author, does not believe in raising slogans. Her writings, rather, are born out of her deep insight into the universal human nature, which she enriches with her characteristic intellectual gift for satire, wit and fine humor. Among all her varied genres of writing, Nabanita finds writing poetry the most gratifying experience. From her first poetry collection, Pratham Pratyay (1959), to the compilation of her best poems, Nabanita Debsener Sreshtha Kabita (published three decades later in 1989), we see the different forms and facets of womanhood manifest in all their complexities, as she addresses various questions regarding the self-identity, the public and private realities of a woman’s life. For example, in her poems, “The Jungle Story”, “Memories of a Floral Clock”, “When It Rains” (translated by Sunil B. Ray, Nandana Deb Sen and Carolyn Wright with the poet), she reconstructs myths and fairy tales by analyzing images, figures and metaphors which unfold both the patriarchal ideologies and the artistic/creative essence of the woman. The image of the woman is dissected and explored in an unmistakable cultural fabric, often retelling epic stories in an effort to unfold the rich cultural, mythological diversity and the range of a woman’s experiences in her own home and within the society.

In her fiction on the other hand, she deals with the psychological and moral crisis of her urban, intellectual protagonists as they embark on a journey of self-exploration, coming to terms, in the end, with a transformed view of their inner selves. Her novels and stories and autobiographical essays, including Bamabodhmi (1996), Bhalobasa Kare Koy (1992), Thikana (1999), Deshantar (1997), Khagen Babur Prithibi Ebong Anyanya (1997), Nati Nabanita (1983) are often characterized by her supreme sensitivity in using the elements of realism with extremely evocative use of language. Ami, Anupam (1978), her magnum opus novel (1978), is centered on the psychological journey of an intellectually inclined person and his complex predicament viewed in terms of the altered political views of the times.

Again, in her more recent novels like Sheet Sahashit Hemantalok (1990), she addresses the issue of loneliness and aging of middle-class Bengali women from different personal and social backgrounds living together in an old women’s home. Among the strikingly different individual women in the novel, there are housewives, working women, a creative writer and a woman brought up in a red light area. She presents their individual and cumulative journeys in the novel and reflects on the gradual decline of power of older women in the context of the urban middle class society in Kolkata.

Nabanita’s short fiction, essays, travelogues and children’s stories, on the other hand, provide readers with a unique tapestry of human emotions, characterized by her fine humor, deep human concern, and superior intellectual faculty, which makes for marvelously rich and intelligent narratives. While her first short story collection, Monsieur Hulor Holiday (1980), is a critically acclaimed book, Galpasamagra (1997), a comprehensive collection of her short stories, brings out the refreshing, incredible wit and humor in her writing.

She has also penned powerful, riveting travelogues such as Karuna Tomar Kon Path Diye (1978) and Truck Baahane Myakmahane (1981), which have become classics in Bengali literature. Her travelogues and autobiographical essays introduce readers to a wide variety of quirky, funny, idiosyncratic humans, including her own self. She provides fascinating, rich details into the varied experiences of urban life through her intimate, engaging, personal style of writing.

A versatile author with myriad literary accomplishments achieved over a course of six decades, Nabanita belongs to the rare breed of women authors of the 21st century whose pen has enriched all forms and genres of creativity. For her, personally, the process of writing has been a ritual of “emotional compulsion”, as she describes in an interview given to The Times of India some years back. As for us, her readers and ardent admirers, we would continue to explore her treasure trove of prose, poetry, plays and children’s literature, and look forward to her publications with never-ending awe and inspiration.

Bio:
Lopa Banerjee is an author, poet and freelance writer based in Nebraska, US. She has a Masters’ in English with a thesis in Creative Nonfiction from the University of Nebraska at Omaha. Her unpublished memoir ‘Thwarted Escape’ has been First Place Category Winner at the Journey Awards 2014 hosted by Chanticleer Reviews. Her poetry, stories and essays have appeared at ‘Words, Pauses, Noises’, the creative writers’ blog of Kingston University, UK, ‘Café Dissensus’, ‘eFiction India’, ‘Earthen Lamp Journal’, ‘Camel Saloon’ (special anthology published on International Women’s Day), ‘About Place Journal’, ‘Spark Magazine’, ‘Northeast Review’, ‘Indian Review’, ‘River Poets’ Journal’. She has also been a recipient of the critic award and ‘Poem of the Month’ award at Destiny Poets International Community of Poets, UK. She tweets at: @rooafza

Cafe Dissensus Everyday is the blog of Cafe Dissensus magazine, based in New York City, USA. All materials on the site are protected under Creative Commons License.

Read the latest issue of Cafe Dissensus Magazine on ‘Cosmopolitanism in a City: The Past and Present of Calicut’, edited by Archa NG, Research Scholar, JNU, New Delhi, India.