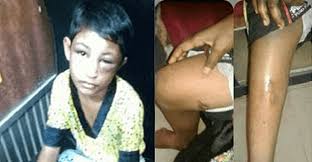 A little over a year after being charged with assault and torture of 11-year old domestic worker Mahfuja Akhter Happy, cricketer Shahadat Hossain and his wife Nritto Shahadat are acquitted by judge Tanjila Ismail of a tribunal for prevention of women and children repression in Dhaka.

Happy was found in the street of Dhaka, crying, with multiple injuries caused by torture. The images of her battered and bruised face shocked the nation, was published by national international media.

Soon after being reported, Shahadat and his wife fled and ran like criminal thugs, took police to go extra ordinary length, including phone tracking and numerous raids to capture them.

Yet, despite having all the undeniable evidences of torture the tribunal found the couple not guilty of the crime, as if, the girl’s torture was some ghostly event, or fabrication of media.

The verdict of this case once again underscored the power of money and connection in Bangladeshi society. The couple has exposed, despite economic advancement, Bangladesh still is a country of callous injustice and gross inequality where the rich can get a better deal over the poor and can even get away with a crime as heinous and well documented as this.

Poor girls like Happy, serves as a dreadful reminder, that, far too often, Bangladesh’s commitment to rule of law is nothing more than an empty promise. The culture of entitlements has reached such an extreme extent here, that those with money can pay a way out of any wrongdoing, no matter how deadly the crime is.

It is now the way of Bangladeshi society – money, unjustified power and connection can take you to any distance, get anything.

Just ask anyone on the street from any corner of the country, they’ll be able to recite a list of criminal cases involving rich and powerful who were not punished.

I laughed out loud when the media reported quoting the prosecutor of the Tribunal Ali Asgar that the couple was being released as the prosecution failed to prove them guilty.

Really! If not in a case as graphically well documented as this, then when?

It is widely rumored within the legal circle that many prosecutors who are appointed by the state seek such appointments because their skills are so poor, it’s the only way they can make living.

The best skill they are rumored to have is cutting leniency deals outside the court room and off the record, even some time willing to sell an innocent person down the river.

This is one of the main reasons responsible for miscarriage of justice in Bangladesh and we somehow learnt to keep a blind eye about it.

This is a common knowledge for the judges of the modern judiciary, that poor performance of the prosecutors and defense lawyers often leads to miscarriage of justice.

Recently in Australia, a trial judge Mark Dean called lawyer Benjamin Linder “Incredibly stupid” accusing that his failing meant the client could not get a fair trial.

In 1993 a British Appeal court headed by Lord justice Steyn along with justice Hutchinson and justice Rougier criticized the trial judge Peter Rowntree for not intervening when a lawyer “Fell markedly short” of the Bar’s standard in defending his client, a 13 year old school boy.

The appeal court blamed and criticized both the judge and lawyer for contributing to a miscarriage of justice.

In the same year the British Royal Commission on criminal justice suggested the judges to take a more interventionist approach when they see lawyers performing poorly in the court.

The financial circumstances of the victims as poor as Happy, that they care more about a livelihood and a financial future than justice, is of course an advantage for criminals as wealthy as Sahadat to cut a behind the door deal, and eventually escaping justice.

Considering this bitter reality, it is understandable that the prosecutors some time may have trouble establishing a case beyond reasonable doubt as is required for criminal conviction.

None, because of her position, would know these ground realities better than Judge Tanjina Ismail. But, because of media attention, this case was just too well documented to deny.

Then the question is what has she done, knowing, as the trial judge she has an overarching duty to conduct a fair trial and to prevent a miscarriage of justice, and it is of course not a step too far for a judge to intervene where the interests of justice require it?

The torture of child domestic workers by the employers are reported seldom but not an unique phenomenal in Bangladesh. Our society lives with it. Although according to a High Court ruling it is illegal to employ a child under 12 as domestic servant. What bothers me most is, in a case as well documented as this the tribunal that was created to protect the vulnerable, delivered a judgment which is “so unreasonable and irrational that no reasonable decision maker would accept it” and by the way this itself is a ground for an erred judgment.

This is not just injustice to poor Happy but an injustice to the Court itself as the judgment completely failed to uphold the integrity and purpose of the court.

Miscarriage of justice is not just about innocent people being found guilty. It is also about guilty people found innocent.

Hoping, a dignified legal professional might take the matter further for the sake of justice, I’ll end with a quote by Edmund Burke for those incompetent judges serves as a tool of injustice, “It is the duty of the judge to receive every offer of evidence, apparently material, suggested to him, though the parties themselves through negligence, ignorance, or corrupt collusion, should not bring it forward. A judge is not placed in that high situation merely as a passive instrument parties, He has a duty to his own, independent of them, and that duty is to investigate the truth….”