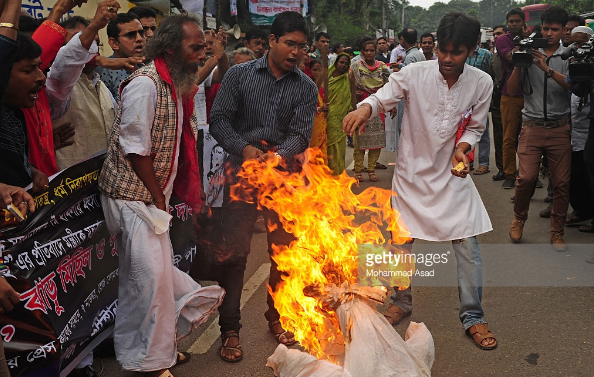 Citizens from all aspects of life and from every corner of the country along with several civil liberty groups have demanded ousting of the Fisheries and Livestock minister Sayedul Hoque for his racist comment hurled at the Hindus after the attack in Nasirnagar of Brahmanbaria district.

Defending the minister, as it is reported by the media quoting unnamed sources, his AL party colleagues argued, that the minister may have referred the Hindu community as “Malawn” in private, but as it was not in public sphere, it did not constitute any breach of ministerial conduct or ground of resignation.

Firstly, the minister was not there on a private business. The tour was funded by the taxpayers’ money, therefore all his action and every word he has spoken are official.

The AL party leaders must be reminded, escorted by the members of the state security agency, the moment a minister enforces his constitutional authority of raising the national flag on the vehicle, he is on state business.

The time when the disgraceful comment was made, the minister was sitting in a state owned rest-house funded by the taxpayer money, enjoying ministerial treatment from the civil servants and central prominence from the journalists.

Most importantly, he spoke with the authority of a minister.

As a minister Hoque obviously knew, all these taxpayer funded entitlements he was enjoying during the visit were not the elements of his employment contract for personal amusement. The financial facilities were provided to him to do a job, and whenever he uses such entitlement, he is on government business.

Secondly, apart from spreading racial hatred, Sayedul Hoque’s most significant offence is recklessness with his position as a member of the cabinet headed by Prime Minister Sheikh Hasina.

A ministerial position cannot be sucked off and resumed whenever it suits the purpose. A responsible minister of the government is always on duty and no claims of “private” affairs eases the responsibility.

In any democracy, ministers are obliged by the code of practices, underlying the standards is that as the position of a minister wields a significant amount of power, a minister must uphold the trust of the citizens, acting in a manner of highest integrity and propriety, believing he or she must resign from the position if any of their conduct breaches the standard in a substantive and material way.

The convention of Ministerial conduct requires a minister to be accountable for their actions, carry the responsibility of any misconduct that results in the loss of public confidence and resignation from the position when necessary.

The Hindu communities in Brahmanbaria are living with the constant fear that the sky could fall on them anytime.

In time like this, we need strong and wise political leadership that can guide us out of this darkness. We must assure the Hindu Community that they are as equal citizens as anyone else and no one, no matter how powerful they are can escape justice.

Bangladesh must immediately win the trust of the Hindu people by setting example.

There is no way a racist bigot like Sayedul Hoque can be part of a government that has won the election promising secularism and governance. His position is unattainable.

The Prime Minister must act quickly and show him the door. There must not be any place in politics for a person as hateful racist as Sayedul Hoque.