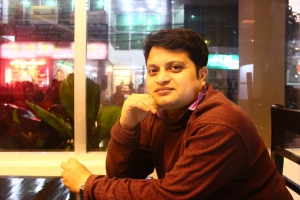 There was a time when only a handful of intellectuals dared to promote free thought and rational thinking countering religious dogmas and superstitions. Their writings were often too complicated for mass people’s understanding, for which they gained little or no attention. Few writers realized the significance of promoting scientific thoughts at the grass-root level. Ananta Bijoy Dash(1982-2015) was one of them. He came from a conservative region of Bangladesh where progressive ideas are rarely being discussed or patronized. Thanks to his cravings for knowledge, Ananta noticed this reality at from an early age. Ananta started trying to bring about change. He was also very much aware of the challenges and obstacles in his path. Together with his fellow free-thinkers, he launched an organization called “Science and Rationalist Council.” Every week he and other members of his team sat down, discussed and debated about many issues. Together they successfully organized a “Science Convocation.” In February 2007; the group came up with its first publication, a magazine fostering science, reason rationality, and humanistic values. It was titled ‘Jukti’ (Reason) with Ananta being its editor.

In the meantime, Ananta started writing for a secular humanist website ‘Mukto-Mona’ with which he remained deeply involved. The founder of the site Avijit Roy was his good friend, an ally and an excellent source of inspiration. Ananta’s dedication and commitment to his ideals lead him to venture into some bold projects. He started setting up banners of Mukto-Mona in Sylhet city including his university campus. His Alma Mater at that time was notoriously infamous for being the stronghold of right-wing extremist student groups. It was a great challenge and albeit risky to promote secular thoughts openly on the university campus. The banner he set up at the university campus lasted a few hours before the campus administration took it down. Ananta didn’t back down. Even the right-wing student leaders his school started reading ‘Jukti.”

Science, History, and Philosophy of Science, Politicization of Science, Freethought, and Secularism are the particular fields of knowledge; Ananta used to write on. His first book “Parthiba” focused on the problems the fundamentalists are creating in the Indian sub-continent, the attempts that are being made to induce religion into science, and through this book he uncovered the facts, analyzing the pseudo-rational nature of these phenomena and presenting their inner contradictions. He also debunked in detail the so-called ‘Miracle of 19’ conceived by another Muslim pseudo-scientist Rashad Khalifa. It is one of the highest read Bangla Article on Bangla blogosphere, not just only in the published form. The 3rd issue of “Jukti” was so popular that, librarians xeroxed the original copies to fulfill popular demand. Many people congratulated him for debunking the pseudo-scientific nature of Koran while the fundamentalists replied which virulent criticism. Ananta came across a lot of people in his short span of life. Some adored him while some loathed him. Since the publication of the magazine, he used to get regular threats for the thoughts published and promoted by the writings in his magazine. The list of his critics goes long, from university professors to religious zealots, from homeopathy practitioners to the regressive left.

Avijit Roy’s death was a major shock to Ananta. Not only because he lost a close friend, a guardian; but also because he couldn’t do anything about it. He didn’t get the time to grieve properly, as he was distracted by the dangers to his life. It is nothing new for people like Avijit and Ananta, who are born ahead of their time. Ananta panicked because his life intertwined with the lives of his family members, especially to his old and ailing parents. Threats were imminent, yet he couldn’t go to a hideout. He had responsibilities of taking care of his parents; he just couldn’t leave them all of a sudden. He got selected under the program run by an organization ICORN offering temporary refuge to persecuted and threatened writers. The process was a lengthy one; all he could do was to wait. In the meantime, Swedish PEN invited him to attend a seminar on “World Press Freedom Day.” Ananta applied for a Schengen visa, but the Swedish embassy rejected his visa application. Just two weeks later, Ananta was hacked to death in front his house by the followers of the “Religion of Peace” armed with machetes. Ananta was supposed to be in Sweden around that time, which means if the embassy had given him the permit; he still would have been remained alive. His death once again proved the presence of loopholes in western policies regarding granting visas to human rights activists. In the face of global condemnation, the Swedish government realized its mistake. It was generous towards other endangered bloggers and provided a secure gateway for many of them afterward. Even in death. Ananta saved many of his friends’ lives.

Ananta Bijoy was a critic of religion though religion was not the focal point of his personal interests. He cherished the theory of Evolution proposed by Charles Darwin. Ananta was a great admirer of Darwin. Perhaps it’s because Ananta had a sharp mind and Evolution was the most revolutionary idea anyone ever came up. He was also interested in the philosophy, history of science and its impact on the sociological spectrum. Ananta championed science; reason and rational thoughts and the extent of his contribution are yet to be fully comprehended. For the future bright minds of Bangladesh, Ananta will be a primary source of inspiration. Perhaps they will be able to complete the remaining unfinished work by him, thus giving his memory real honor and justice.

Ananta Bijoy Dash at a glance:

2. Author of “Soviet Unione Biggan O Biplob” (Science & Revolution in Soviet Union). Published by Shuddhashar Publication, Dhaka, February, 2012. A book of total 214 pages, this is the first one in Bangladesh on the history of Soviet Science during the Stalin era. The politicization of science during Stalin era, the inhumane persecutions, the forced inducement of political ideology into scientific practices, and the authoritarian role of the notorious pseudo-scientist Trofim Lysenko were discussed in detail in this book.

3. Author of “Parthiba” (a collection of Articles on Secularism & Rationalism), Co-author Shoikot Chawdhury. Published by Shuddhashar Publication, Dhaka, February, 2011. In English, Its title is “Nothing is Divine”. The book is 140 pages. The main theme of this book is secularism and opposing the irrational religious viewpoints of Hinduism and Islam. The problems the fundamentalists are creating in the Indian sub-continent, the attempts that are being made to induce religion into science, and we have uncovered the facts, analyzing the pseudo-rational nature of these phenomena and presenting their inner contradictions. In this book, Ananta debunked for the first time in Bangla in details the so-called “Quranic Miracle of 19” conceived by Egypt-born Muslim Pseudo-Scientist Rashad Khalifa.

4. Editor of “Darwin: Relevance in the Twenty-First Century and Thoughts”. Published by Abosar Publication, Dhaka, February 2011. The book is 239 pages. As a tribute to Darwin, the book was published on the 200th birth anniversary of Charles Darwin and the 150th anniversary of the publication of “On the Origin of Species”. Several Indigenous and foreign writers wrote on this editorial collection. This is the only book to be ever published on the occasion of this anniversary, among the 300 million Bangla speaking people in the Indian sub-continent.