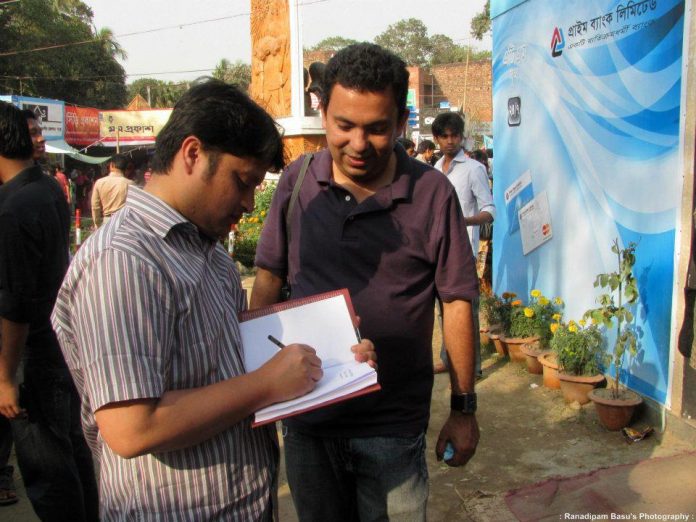 Avijit Roy had great admiration for Charvaka- one of the greatest philosophies  born in our part of the world, which from the ancient times had challenged the divinity of the Vedas, dared to call the holly books man-made, and for that Charvaka practitioners were persecuted.

Charvaka was not the only victim of blind faith, neither the killings of those who uphold the values of humanity for a liberal and humanistic society are an exclusive Subcontinental phenomenon.

The persecution of the campaigners of freedom and rationality by the zealots has been going on in history all through and all around the world to institutionalise and to impose faith.

If you are ever to visit Campo de’ Fiori in Rome, at the centre of Roman Catholicism, you’ll find a monument dedicated to Giordano Bruno stands as a symbol of defiance, whom, the Italians reagard as a martyr of freedom of thought, and many prominent rationalists such as my dearest friend Andrew Rawlings regard as a revolutionary blogger of his time.

In the year 1600 he was burned at the stake by the Catholic clergy for heresy, and all of his writings were censored.

Avijit, in response to the question of what inspired him, once said, “Our aim is to build a society which will not be bound by the dictates of arbitrary authority, comfortable superstition, stifling tradition, or suffocating orthodoxy but would rather be based on reason, compassion, humanity, equality, and science.

We argue for a rational and scientific approach to human problems as an alternative to religious dogmas, strongly defend freedom of thought and civil liberties, and, strive for the secularization of politics, society and educational system.”

But, all went in vain, despite the centuries long hostility, continuous promotion of ignorance, and absurd claims such as holy scriptures are the only source of true knowledge, the human spirit overcame all hurdles; and with the progression of civilisation- science, philosophy, and rationality prevailed as the driving force of the human society.

Today, clerics become a laughingstock, even in countries as conservative as Pakistan, when they propose scientific research on Djjins to solve the energy crisis of the world, claiming them as the source of infinite energy.

This is exactly how, even long after the death, kamikazes of knowledge such as Avijit and Giordano claimed ultimate victory over ignorance- through the knowledge they have promoted, words they have written, and books they have authored.

In the evening of February the 26th, 2015, just four days after the day of 21st of February- the very day that symbolises freedom for the Bengali people, Avijit Roy was killed by the militant group Ansarullah, on his way home from the most sacred sanctuary for a Bengali writer ” Ekushe book fair”.

His beloved wife Bonnya had to watch the brutality ; also among the witnesses was a contingent of police who were on duty within a striking distance, but they didn’t come to aid.

The murder of Avijit Roy marked the beginning of a spate of killings of Bangladeshi secular writers and freethinkers. In the coming months the machete wielding assailants, in the name of religion, slaughtered secular bloggers, publishers, university teachers, freethinker activists one by one.

To commemorate the sacrifices made by Avijit and his band of secularist writers, under the supervision of sculptor Rasha, a monument of defiance christened  ” Mukto Chinta Stombho” is currently under construction, on the very spot where Avijit was murdered.

The greatest irony is that, Avijit Roy’s books are barred from being sold in this year’s book fair, along with other secular writers such as Nazmul Hassan, and Pen Canada’s Ken Fiklow prize winner writer Raihan Abir.

If it is to be believed that the writers and authors are the curators, and the keepers of the human history; and the true purpose of knowledge is to seek truth, then, for the future of our society, governments must not under any circumstances restrict academic freedom.

Writers and authors shape human culture, our entire existence can be summed up with the written word. No one has the authority to censor someone’s thoughts, not any government and not any religion.

It must be realised that in today’s world academic freedom is seen as sacred, and can not be compromised.

Our country was built upon secular beliefs, and such beliefs are increasingly being propagated through technologies such as the internet, giving way to a new generation of young writers thirsty to carry the torch once borne by martyrs such as Avijit Roy.

Religious fundamentalists have become desperate, their very ideologies are now cornered.
It’s only a matter of time until the machete-wielders realise that death can never be the end of reason.

Values and spirit of Vivekananda: Influence on Netaji