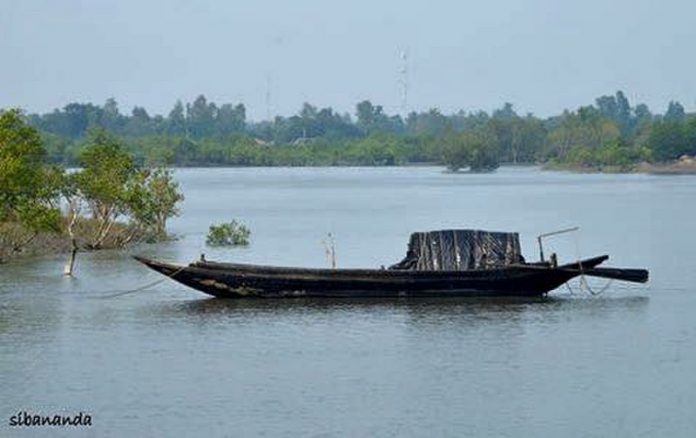 “One ☝ of the best #Nature retreat I have endeavoured so far”.
That was in October 2015 and I had a dream to visit “Sunderbans”which came true.

We reached Canning from Kolkata by hired vehicle after travelling for say 60 to 65 km only & from there our Tour operator took charge of us.We were altogether 6 adults and a kid.
It was a package tour and all the meals during the voyage and night stay at different islands were including food and accommodations.

It was a real delight to watch passing by boat/ship from a distance with limitless water behind.For non-vegetarians it was a real delight with local fish fries served with sauce and different veg varieties were served too on board.
The first day was spent on the boat well equipped with minimum required amenities watching the Sundarban delta from one island to other and at the evening we took rest at “Pakhiara islands.
The stay and fooding in the Island Resort at Pakhiara was equally palatable with some musical programme by localities showing their “cultural heritage” based around life in Sundarban islands and their constant fear of “Royal

“Sundarbans is most famous World wide”

Watching birds like Egrets and so many other varieties against lash green background is a memory for ever.On the 2nd day after breakfast at the resort we were taken by Steamer Boat to some different islands mostly famous for sighting “Royal Bengal Tigers “.
Getting a glimpse of these rare Tigers was a matter of chance which we were not lucky enough.

“Red crabs ” on the marshy water were so rare to be seen in most other places but it was a possibility there.

Every turn and twist were so scenic that i couldn’t stop myself but clicked few awesome shots.
Ships of “Bangladesh crossing International water body-really rare scenic view.
The entire journey , the food , and scenic Marshy land was a real memory to cherish.On 2nd evening some “Typical Tribal Dance” was performed by the localites.

Blue crabs to be honest I never had encountered before in my life(Shiny Fluoroscent Blue).

Getting a glimpse of Golden Spotted deer from steamer really made

Their main mode of transport from one island to another was only boats.

Though Black drongo I had seen before many a times in our plane lands but these “species of Drongos” were unique to Sundarban’s.

“Water monitor Lizards ” though not so easy to get a in most other places but it was a real memory watching a Luzards coming out from bushes and crossing the water.

It was a trip of “2 nights and 3 days” rich with “scenic Sundarbans” with it’s unique curves full of “Fauna & Flora” just unique to this “geographical location”.