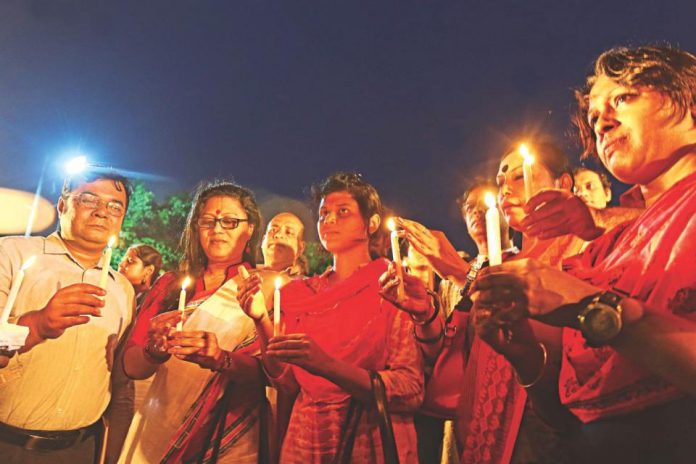 Just a day after being inaugurated as the 45th president of the United States, Donald J Trump and his band of right-wing fascists were fearsomely warned by millions of women from all across the globe that misogyny is not an accepted norm, and any attempt of further degradation of women would be challenged vigorously.

The march had it all — solidarity, defiance, spontaneity, humanity, strength, and power. In fact it was so empowering, that for a brief moment, I felt goosebumps.

A few months ago, Polish women made history when thousands went on strike against a proposed abortion law to further restrict a woman’s right over her body. The rebellion forced schools, businesses, services all across Poland to close down doors and eventually, despite receiving strong support from the country’s powerful Catholic Church, the right-wing Polish government backed down.

A similar rebellion against patriarchy took place in Iceland on October 24, 1975. On that day, underpaid and underrepresented Icelandic women took off from all kinds of work, even cooking and cleaning, which changed Iceland forever, and for good.
Marked as “Women’s Day Off” in the history of feminism, the rebellion, within five years, helped Vigdis Finbogadottir to emerge as the first female prime minister of the country.

In 2016, we in Bangladesh have also witnessed large scale protests in every district of the country following the brutal murder of Tonu — a college student who became a victim of a sexual crime of the worst kind, but unfortunately, our efforts were fruitless.

Despite the fact that the crime was committed within the boundaries of one of the most restricted and supervised premises of the country, after so many months — call it a joke — we are still told that the perpetrators are yet to be identified.
Tonu’s murder has now been almost erased from our memory, and why not? How many names can be remembered? She was neither the first victim of such a crime, nor, as the recent news headlines suggested, to be the last one.

Her death, and the injustice that has followed it, is a reminder that Bangladesh may have been praised for achievements in gender equality and women empowerment in recent years, but the ground reality in terms of justice and security is still disheartening.

There is no denial of the fact that gender equality is enshrined in our constitution as a state principle and in recent years, Bangladesh has created significant legal provisions in favour of it, including ratification of key international protocols such as the Convention on the Elimination of All Forms of Discrimination against Women (CEDAW).
It implies that the problem does not lie with inadequate legal provisions, but rather with implementation, both political and social.

A few years ago, during a conversation, in response to the question of how it feels living abroad in comparison to Bangladesh, I was told by a female student that apart from being homesick, she enjoyed the freedom, as she felt no fear on the way home from work even if it was midnight, no longer faced eve teasers on the streets, and most importantly, she was not touched inappropriately while on public transport.

Honestly speaking, I was shocked, but it was also a moment of truth for me. Being a Bangladeshi man, I was truly ashamed. Is that what our women think of us?

We can act like ostriches and bury our heads in the sand, but it won’t change the fact that while women in other democracies are campaigning for greater freedom and equality, our state — which promises democracy, rules of law, and gender equality, at least on paper — has genuinely failed to provide basic rights for women such as security, justice, and social recognition as equal human beings to men.

Any fair-minded person would know, that the patriarchal structure of our society and the intoxicating sense of power it has attributed to Bangladeshi men is a threat for the advancement of women’s cause.
On top of that, our extreme interpretations of religion are making it even harder.

It’s a recipe of disaster, when a corrupt system, where men are only authoritative enough to speak on behalf of God, and pedophilia and polygamy are actively facilitated, becomes the authority for the welfare of women.

And our society, where women are intentionally treated as inferior, is a burning example.

Influenced by medieval patriarchal norms, we still judge a woman based on how she dresses, how she talks, with whom she associates; and even in the events of great injustice, almost shamelessly, we ask stupid questions like why she was out at that time of the evening, or why she was out shopping alone, or even worse, is she still pure?

No one has to be a rocket scientist to understand that these norms were designed by the patriarchy to downplay the crimes committed by men, and to degrade and dehumanise women.

The situation is not better for married women either. A study carried out in 2011 jointly by the United Nations Population Fund and Bangladesh Bureau of Statistics found that 87% of Bangladeshi women who were surveyed had suffered from assaults, both sexual and physical, by their husbands.

Unfortunately, this issue has been hidden from the women’s welfare agenda by our society to protect the institution of marriage and in the name of prevention of social chaos.

When it becomes clear that the Bangladeshi patriarch will not willingly allow women the rights that belong to them, perhaps our activists should consider fighting back in exact same fashion as the protesters in the US.

Together, as a union of women, they can wield such great strength that it can bring down any barrier, reach any destination, and maybe, just maybe, like Iceland, this will also change our society forever. And for good.