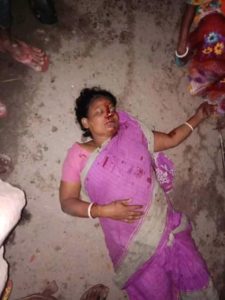 Bangladesh’s leading daily Dainik Prothom Alo reports that a family belonging to the minority Rabidas community was attacked for land grabbing in Mymensingh’s Ishwarganj upazila. They say the incident took place at Uchakhila Union Bazar of the upazila around 8:30 pm on Saturday. At least 10 men, women and children of the family were injured in the incident. Three seriously injured people have been taken to hospital.

Police led by Officer-in-Charge (OC) of Ishwarganj Police Station Ahmed Kabir rushed to the spot and took control of the situation after removing the occupants.

The members of the family complained that the next generation of the late Kailas Rabidas was living in a 10th century land on the Uchakhila-Ishwarganj road in front of the Uchakhila Union Parishad (UP). Recently, Abdul Awal and his men from the same area took possession of their valuable land. They are trying to evict them from the land of Uchakhila Bazar.

Uchakhila UP chairman confirmed the attack. Shafiqul Islam Bhuiyan. He said that he had called both the parties in UP around 11 am on Saturday to resolve the issue. The people of Rabidas family went to him but no one went on behalf of Awal. He said he would sit down after Eid. At night he learns that the minority family has been attacked.

Ishwarganj Police Station OC Ahmed Kabir told Prothom Alo on Sunday that Arjun Rabidas had filed a case on behalf of the Rabidas family, naming 12 people and accusing seven or eight unidentified persons. Police arrested the three and sent them to court.

On the other hand, another magazine Kalerkantha reports that,

A local Juba League leader tried to occupy the house of Rabidas family at Uchakhila Bazar in Ishwarganj of Mymensingh. In order to prevent this, houses were attacked, arson and looting were carried out.

Five people, including a woman, were injured at the time. Four critically injured people have been sent to Mymensingh Medical College Hospital. The incident took place at Uchakhila Bazar of the upazila around 8:30 pm on Saturday. Minorities and locals staged a protest procession condemning and protesting the incident.

The injured are Shubh Rabidas (12), Mohan Rabidas (40), Suchi Rani Rabidas (25) and Minti Rani Rabidas (25). A large number of police led by Ishwarganj Police Officer-in-Charge (OC) Ahmed Kabir rushed to the spot and took control of the situation. The OC confirmed that three people were arrested in the incident.

According to local sources, the Uchakhila-Ishwarganj road has passed in front of the Uchakhila Union Parishad (UP). The next generation of the late Kailash Rabidas has been living in the 10th century land along that road for generations.

Recently, Abdul Awal Gang had a greedy look at that valuable land of Rabidas community. Many members of the Awal Gang are involved in various government organizations. They are known to be influential in the area. A group of 15/20 people led by Ashraful Islam Sohail, joint convener of the local Juba League, Awal’s son, entered the house on Saturday to carry out an armed attack to evict the Rabidas community from their homes. The screams and cries of the women and children who were attacked became heavy. The assailants fled when the market people rushed to the spot.

Uchakhila Union Parishad (UP) Chairman. Shafiqul Islam Bhuiyan said he had given time around 11 am on Saturday to resolve the issue through arbitration. But the people of Awal did not come to the arbitration. Later he got the news that the attack took place around 8:30 pm. He later went to the spot and witnessed the attack on the house. He wants a fair trial.

Mizanur Rahman Mizan, the convener of the local Juba League, admitted that the accused Sohail was the joint convener of his organization and said that it was not a matter of the party. Completely Sohail’s exclusive subject. The party never tolerates these irregularities.

Accused Sohail said, the family forcibly took possession of our land by marketing. When we protested against this incident, the family of Rabidas set fire to our two motorcycles. When they protested, they set fire to their own houses and vandalized them. None of my people are involved in this incident.

Ishwarganj Police Station OC Ahmed Kabir said he was on the spot with several policemen after receiving the news. Three people have been arrested in the incident.