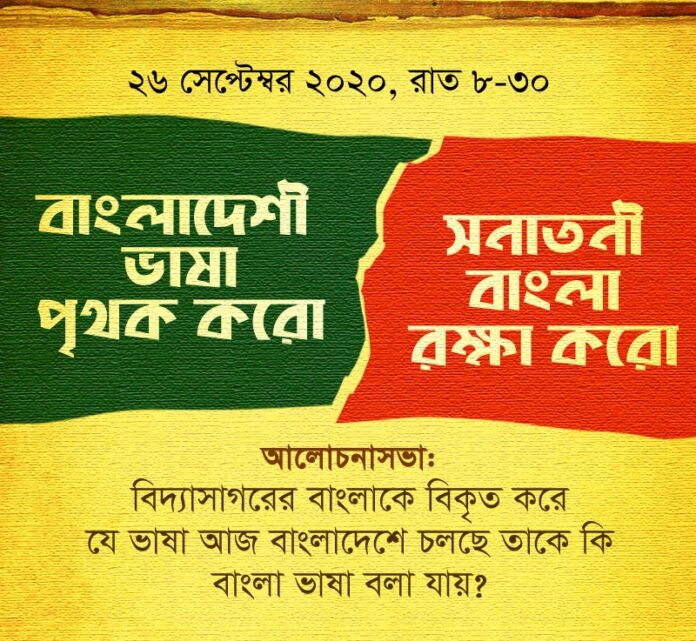 Microsoft’s CEO Satya Nadella’s son 26 year old Zain Nadella, who was born with cerebral palsy passed away recently and his death was mourned by many on the social media. Former Governor of Tripura and writer Tathagata Roy’s comment on Facebook in English ended with the words ‘Om Shanti’, a Sanskrit loan phrase meaning ‘let there be peace’ which is used by the Hindus in various Indic languages including Bengali and even Indian English. The Facebook translation engine offered a Bengali translation of the English comment where it used ‘Assalamu Alaikum’ as the translation for ‘Om Shanti’. ‘Assalamu Alaikum’ is an Arabic loan phrase meaning ‘peace be upon you’, used by the Muslims as a greeting in many languages including Bengali. 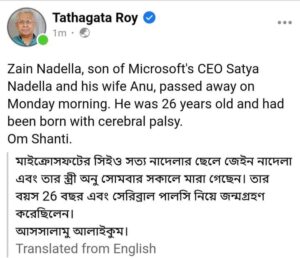 ‘Om Shanti’ being a commonly used Sanskrit loan phrase in Bengali, didn’t require a translation at all. It should have been simply transliterated as ‘Om Shanti’ in Bengali. ‘Om Shanti’, a solemn message which is used in many contexts, including mourning as in this case, certainly does not translate to ‘Assalamu Alaikum’, a message of greeting. But, Facebook uses an AI powered algorithm for translation which like all other translation engines are user driven. The more the users use the translation and make corrections to it, the more the machine translations get accurate. The majority of the Bengali-speaking users on Facebook being Bangladeshi Muslims, it is not unlikely that they provide most of the inputs to the translation engine. This skewed distribution not only results in translations with generous use of Arabic loan words but also shocking results such as this.

Bengali Hindus of West Bengal frequently complain in various social media platforms about the adulteration of the pristine Bengali language through deliberate insertion of Arabic loanwords, in school textbooks, media and automated translations in social media. There are dozens of Arabic loanwords in the Bengali lexicon since the middle ages, however in modern standard Bengali used in West Bengal, many of them are not in common use. In recent years, there appears to be deliberate attempts to use uncommon Arabic loanwords, even new ones, under Bangladeshi influence. The modern standard Bengali used by the Bangladeshi Muslims in Bangladesh has diverged significantly from the modern standard Bengali used by the Bengali Hindus in India the last 75 years since the Partition.

The divergence is not just limited to jal and pani, the most commonly cited example. The words for addressing near and dear ones are different. Baba (father) in West Bengal is abbu in Bangladesh, similarly ma (mother) is amma, dada (elder brother) is bhaiya, didi (elder sister) is apa, boudi (elder brother’s wife) is bhabi, jamaibabu (elder sister’s husband) is dulabhai and the list continues. Bengali words with any reference to idolatry have been replaced with alternative words in Bangladesh. Ramdhanu has become rangdhanu, bastutantra (ecology) has become pratibesh. Usage of Arabic loanwords or Arabic origin words are common. Asmani (from Arabic Asman, meaning sky) is used for sky blue instead of akashi, goshal (from Arabic Ghusl, meaning ablution) is used for bath instead of snan, kadu (from Arabic kudrat meaning good fortune) is used for gourd instead of lau and again the list continues. Certain administrative terms, even though both are from Sanskrit, differ. What is paurasabha (municipality) in Bengali is purasabha in Bangladesh, mantrak (ministry) is mantranalaya and parikathamo (infrastructure) is abakathamo.

Many intellectuals in West Bengal have time and again raised concerns on the Arabization of the language in Bangladesh which in turn is corrupting the language in West Bengal. Noted painter Shuvaprasanna once speaking at an event had described with examples how the Bengali language has been corrupted in Bangladesh with deliberate usage of Arabic loanwords to the extent that it is now a different language altogether. Former Vice Chancellor of University of Gour Banga, has repeatedly described the Bangladeshi variant of Bengali language as a separate language.

The attempt to Arabize the Bengali language by inserting Arabic loanwords is nothing new. In the first half of the 20th century, a section of the pro-Pakistan Bengali-speaking Muslim intellegentsia was engaged in such nefarious acts. Rabindranath Tagore had expressed his strong disagreement at this. He sternly warned that if the present state of the Bengali language was not able to properly express the mood and emotions of the Bengali-speaking Muslims, they are free to adopt Urdu as their language. Today, almost a century after Tagore’s stern rebuke, it seems that he was right. Had Musalmani Bangla been recognized as a separate language then, ‘Om Shanti’ wouldn’t have been translated to ‘Assalamu Alaikum’ today.

As the 21st century world becomes smaller and smaller, AI driven natural language processing for example translation from one language to another in text/speech or conversion from text to speech & vice versa will become more and more common. In such a scenario, the seemingly innocuous mistake in a social media post today can assume serious proportions in the future. Imagine tools like IBM Watson making a critical mistake in generating a lung cancer treatment regimen, because of unrecognised linguistic differences! Bengali and Bangladeshi must be recognized as separate languages before it’s too late.

About the Photo: Poster image of a webinar held on 26th September 2020, on the 200th birth anniversary of Pandit Ishwarchandra Vidyasagar, the great 19th century Bengali social reformer who also standardized the present Bengali alphabet and wrote Barnaparichay, the primer for learning Bengali for toddlers whose is used even today. The text in green-red translates as – Separate the Bangladeshi language, protect the Sanatani Bengali language. Webinar title: The corruption of Vidyasagar’s Bengali that is in vogue in Bangladesh today, can it be called Bengali?