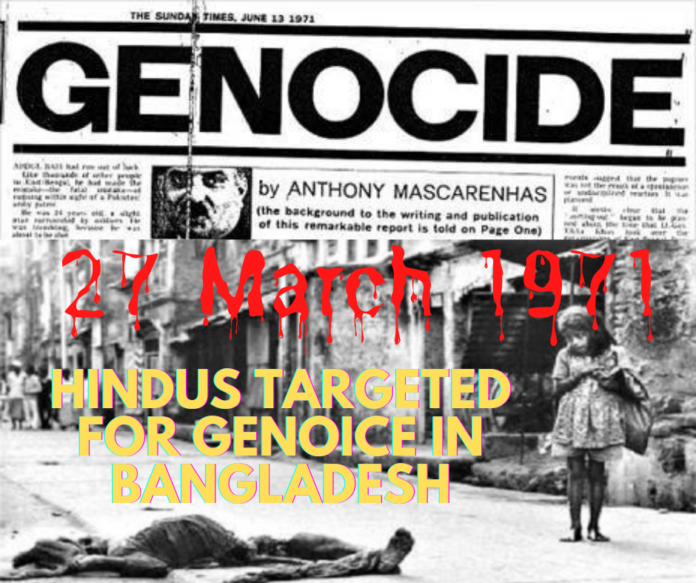 27th March 1971: When it became apparent that the Bengali Hindus were the targets of genocide

On the evening of 25th March 1971, the Pakistan Army launched Operation Searchlight to subdue Awami League’s Non-cooperation Movement that sought autonomy for East Pakistan. The stated plan was to arrest the movement’s leaders including teachers, students & cultural activists, disarm the East Pakistan Rifles & police and capture all communications including radio, television, telephony etc. The specific operations were delegated to the various battalions and companies of the Pakistan Army, including the ones flown over from West Pakistan in the last two weeks.

The operation commenced late in the evening and went on throughout the night. It momentarily stopped during the call for Muslim prayer on the 26th morning and continued again. By that time, four major areas had bore the brunt of the operation. Pilkhana, the headquarters of the East Pakistan Rifles and Rajarbagh, the headquarters of East Pakistan Police had been attacked. Dhaka University’s Iqbal Hall (now Sergeant Zohurul Hoque Hall) was the hotbed of student’s movement and Rokeya Hall, home of some of the female student activists, were also attacked.

However, Dhaka University’s minority student’s hall namely Jagannath Hall and the Bengali Hindu-inhabited Old Dhaka, places which were in no way connected to the Non-cooperation Movement also came under severe attack. Jagannath Hall was shelled with mortars and fired from light machine guns. Later in the night, the Pakistani soldiers entered the premises and shot dead the survivors. On the next morning, several victims were lined up in batches and summarily executed. 66 students, teachers and non-teaching staff were killed in the massacre.

In the predominantly Hindu-inhabited Old Dhaka, at least 700 people were burnt to death on the night of 25th. The Pakistan Army continued its killings in Old Dhaka on the following day. In a gruesome massacre in Shankharibazar, an estimated eight thousand Bengali Hindus were killed. The Pakistan Army blocked the two ends of the narrow Shankharibazar Road and set the locality on fire. As the residents rushed out, they were sprayed with bullets from machine guns. The iconic photograph of the devastating massacre is that of three year old Buddhadeb Sur, who was bayoneted in the chest by the Pakistan Army.

As the day rolled into the night, the most sinister of acts were about to unfold. At two o’clock past midnight, the Pakistan Army attacked the Kali temple in the middle of the Ramna racecourse ground. The 120 feet high Ramna Kali temple was not only the iconic monument of the city but it was also the living testimony of the Bengali Hindu civilization in eastern Bengal. The temple and the adjacent Ma Anandmoyee Ashram were destroyed. Approximately 200 devotees of the monastery were killed and a dozen women taken captives. Paramananda Giri, the priest of Ramna Kali temple was shot dead. As 27th March dawned in East Pakistan, Hindu temples and monasteries were attacked throughout the province. In Dhaka, the Shibbari in Dhaka University was attacked. The Nimbarka Ashram in Mirza Jangal, Sylhet was attacked and its head priest murdered in broad daylight.

The hatred for the Bengali Hindus was clear in usage of racist slurs during the attack. During the raid into the Jagannath Hall, the Pakistan Army had specifically asked the sweepers the whereabouts of the malauns, an ethnic slur for the Bengali Hindus. They referred to Professor Govinda Chandra Dev as a malaun before shooting him dead in front of his adopted Muslim daughter.

Within a span of less than 36 hours Dhaka witnessed three gruesome massacres in Jagannath Hall, Shankharibazar and Ramna where the Bengali Hindu students, residents and devotees were put to death, even if they posed absolutely no threat to the integrity of Pakistan. Neither were they actively involved in the non-cooperation movement, nor were they planning any armed insurrection, nor did they engage in any acts of rioting against the Bihari population. If it was not clear on the 25th and the 26th, on 27th it became apparent that the Bengali Hindus were targeted for no other reason than being Hindu.

The mass killings of the Bengali Hindus were recognized by US Consul General in Dhaka Archer Blood as genocide at that time, but later forgotten. Professor Gary J Bass in his book ‘The Blood Telegram’ had referred to it as ‘a forgotten genocide’. It is only on the 50th year of its occurrence that a few Hindu American organizations and a few US Congress members have remembered the forgotten Bengali Hindu genocide.

George Santayana had famously remarked, those who cannot remember the past are condemned to repeat it. No other community in the world has proven Santayana right, the way the Bengali Hindus did. In the 50 years of Bangladesh’s existence there has not been a single decade that has not seen a major persecution of the community. It is therefore imperative that the Bengali Hindus do not forget the genocide, ever. Like other communities that have been victims of genocide, the Bengali Hindus too should commemorate their genocide on an annual remembrance day. There is perhaps no other day of greater significance than 27th March, the day Ramna Kali temple was destroyed and its priests & devotees massacred.