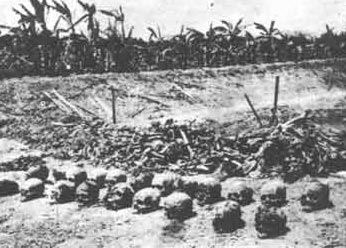 On a sultry afternoon in May 1971, Wajed Ali stood exhausted on the banks of the Bhadra river, in East Pakistan. He had made enough money not only for the day, but for the months to come. In the uncertain times of the Muktijuddho, it is always a good idea to have some extra savings up in the sleeve. Ansar Ali Sardar had also made a similar fortune and so did the other 40 odd men on that day.

From the dawn of 21 May, they were engaged in disposing corpses that lay along the streets of Chuknagar, from Patakhola Beel to the Bhadra river and from Satkhira Road to Ghangrail river. For miles, women lay on the ground grasping their husbands, children clasping their parents and infants suckling their mother’s breasts. Fifty paise for each corpse, their contractors Siraj Uddin, Ghulam Hussain and Haider had offered and it was enough to get them into work.[1]

Wajed Ali had teamed up with another fortune seeker and together they began to dispose of the corpses one by one into the Bhadra river. He and his partner counted till 4,000 when they decided it was enough.[2] The cash and jewellery in possession of the dead was what caught their attraction, to the effect that they often missed the count, which valued at a mere 50 paise.[3] Leaving aside the bounty, Wajed Ali would have made thousand rupees on a single day, more than three times the per capita income of East Pakistan in a fiscal year.[4]

The victims had been on their way to India, fleeing their motherland in the hope of survival. Considered as the enemies of Pakistan on the ground of their Hindu identity, their extermination and expulsion had become the unstated policy of the martial law regime as the ‘final solution’ for the problematic province. The massacre at the Jagannath Hall – the Hindu students hostel of Dhaka University, the gruesome massacre in the Hindu inhabited Shankharibazar neighbourhood of Old Dhaka and the destruction of the iconic Ramna Kali temple along with the massacre of devotees, left no doubt as to who the targets of the ethnic cleansing were.

As the district and sub-divisional towns of East Pakistan fell to the Pakistan Army one by one, hundreds of thousands of Hindus began to flee the country. On the fateful day of 20 May, an estimated one hundred thousand Hindus had arrived in Chuknagar, a riverine transit point for their onward journey to India.  Alerted by the local collaborators, Brigadier Muhammad Hayat led a Pakistan Army platoon to Chuknagar. No sooner than the trucks reached the spot, the men began firing indiscriminately at the refugees. Commencing at 11 am in the morning, the killings came to a halt at around 3 pm, only because the Pakistan Army had run out of magazines.[5]

The death toll in Chuknagar is commonly believed to be somewhere between ten and twelve thousand. Ansar Ali Sardar who was engaged in disposing off the corpses had recalled later that the 42 men worked in 21 pairs and he and his partner had disposed off the corpses in batches of 200, presumably to speed up the proceedings.[6] In this process, he and his partner may be reasonably expected to have stacked up a number in the vicinity of Wajed Ali and his partner’s 4,000, a conservative number by the latter’s admission. If each pair is considered to have disposed off a similar number of corpses, the death toll would amount to 84,000, exclusive of the corpses that already lay in the ponds and ditches.

Even with the commonly cited estimate of twelve thousand, the civilian massacre at Chuknagar stands leagues apart from the likes of My Lai and Lidice, often referred to in the context of mass killings during the Bangladesh Liberation War. The five figure mark at Chuknagar within a span of four hours is only matched in scale and intensity by the massacres at Babi Yar (33,771 victims, 29-30 September 1941), Odessa (25-34 thousand, 2-4 October 1941) and Operation Harvest Festival (43 thousand, 3-4 November 1943) during the Holocaust.

The connection between Chukanagar and the Holocaust is not just a superficial comparison of the death toll. During Pakistan Army’s extermination campaign in East Pakistan an US official had commented, “It is the most incredible calculated thing since the days of the Nazis in Poland.”[7] Just as the Nazis couldn’t have carried on a massive extermination campaign without local collaborators, so couldn’t have the Pakistan Army, who heavily relied to groups like the Razakars, Al Badr, Al Shams and Peace Committee to name a few. The first batch of 96 Razakars took oath at an abandoned Ansar camp in Khulna earlier in May 1971, not far away from Chuknagar. As they took oath in defending Pakistan from the enemies with their hands stretched out forward, their oath taking gesture eerily resembled the Nazi salute.

The genocide eventually came to a halt after India’s military intervention that liberated Bangladesh as soverign nation. The perpetrators of the genocide were never brought to trial following a series of exchanges of prisoners and stranded citizens between Bangladesh and Pakistan, mediated by India. The reality of Hindu genocide was also conveniently rebranded as Bengali genocide in the name realpolitik. However, the increasing persecution of Hindus in Bangladesh in the last decade had led to renewed interest among the Bengali Hindus on the genocide that they endured half a century ago.

In the fiftieth year of the Bangladesh Liberation War, the Bengali Hindus at home and abroad have begun commemorating the genocide on 27 March, in memory the day when the Ramna Kali temple was destroyed. The destruction of the temple symbolically represents the systematic destruction of the five millenia old Bengali Hindu civilization and culture that prospered in the land. However, genocide is a complex and elaborate process that spans across space and time. Nurturing of every detail of genocide in the collective memory is important, as the loss of any single story lets the insidious self-denial to creep in, allowing it to multiply like virus that eventually conquers host. Chuknagar being the deepest scar of 1971, deserves a special annual commemoration more than any other incident and better late than never it should commence in earnest on the fifty first year of its occurrence.