Home Region Assam An ancient cult and the associated legends: Where the Goddess, earth and... 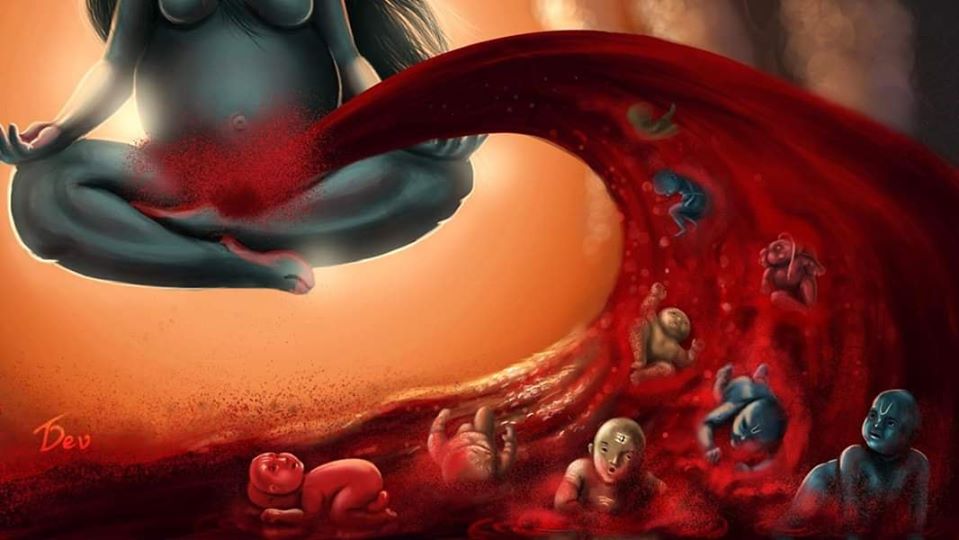 After the harsh inflammation of Grishma or summer, as slowly the earth turns moist, lenient and suitable to sustain the new seeds- the time is called as Ambubachi.  The term “Ambubachi” has come from the Sanskrit words “Ambu” (water) and “Bachi” (growth). It is a yearly festival. In various local dialects, it is also named as Amavati.

As per the scripture of Raghunandan Bhattacharya, named “Ashtabimsati” Tathwa, in the Tithi Tathwa and Kritya Tathwa, the time of custom is the mentioned as follows.

(It means that during the month of Aashaar, the time when the Mithun Raashi enters the first phase of the rule of star or Nakshatra named Aadra- that time the mother earth and the preliminary power the great MahaMaya  deal with her period of menstruation. From that, the time of Ambubachi begins. The total duration continues until the journey of Sun God end in with Mithun Raashi, up to three days twenty hours.)

The earth has always been indicated as a mother in Hindu scriptures from Vedas to Puranas.  These three days are considered as the time of menorrhoea of earth. No cultivation is done then. The reason is that the soil can get richer during the rainy seasons and for the New Year along with yielding more crops of harvest.  Hence, in this agrarian cult, women and goddess become the same. From this idea, when the land becomes moist from the beginning of the month of Aashhar, the planet is believed to be a woman being on the rag. Then starts the Ambubachi pravritti and the event ends with Ambubachi nivritti after three days.

At various places of India, it is also celebrated as the Rajah utsav or the festival of mother’s monthlies. The people living by the vrata or sacrament does not intake non-veg items at this time. They don’t favour any food heated with fire on the unsanctified soil. Hence at many places people already keep their food cooked and ready from before. At this time fairs are arranged by many Hindus at various places. The most prominent one is the event at Kamakhya Temple, Guwahati that rests on the top of Ninanchal Hill. Besides, it is one of the popular tourist-destinations sites in Assam. Also, it is one of 52 holy Shakti Peethas of Hindus.

The legend goes like this. Lord Shiva is a god representing the non-Vedic community who was unmarried and living the lonely life of an ascetic. Adi Shakti took birth as the daughter of King Daksha, the son of Brahma to fill the lonesome life of the God. She was named Shati and Dakshayani. From her young age, she performed strong penance to gain Shiva. However, despite Daksha being strictly against this and always making fun due to the poor and strange life-style of the god, they got together against his will. Further, she hankered for the acceptance of Shiva in her family.

Once, the father sets to perform a grand Yagna ceremony, inviting all the leading Gods, kings and other popular personalities. But, Shiva was not called at all. Sati insisted on attending the event. However, Shiva advised against. As she checked into her father’ home where she was further treated as worthless, Daksha rudely insulted her by her husband’s name. Keeping the pain in heart the mind got blown up by the insolence and ignorance. She threw herself on the fire of the yagna and preferred to accept death.

Hearing the news, Shiva in full rage rushed there and picked his wife’s dead body. He started the Tandava dance, the rhythm and movements of destructions. Seeing his act of wandering throughout the universe, everybody got scared. To save the world from Shiva’s fume, Lord Vishnu came forward with his Sudarshana Chakra and shattered Shati’s body into pieces. The portions fell at various places of the Indian subcontinent. The place where the genitals and womb of the Goddess are believed to be felt, the temple of Kamakhya is built.

As per researches, the site is an ancient sacrificial spot for Kameikha (that means old-cousin mother), an Austroasiatic tribal goddess representing the Khasi and Garo communities. Besides, the Kirata origin of the goddess is also supported by the accounts of Yogini Tantra and Kalika Purana. The temple went through destruction due to the foreign Islamic invasion of Hussein Shah on the Kamata kingdom. It is reconstructed by the king of Cooch Behar and has formed a hybrid indigenous style referred to as the Nilachal style, having a hemispherical dome present over a cruciform base.

Another story is associated with the temple regarding an incomplete staircase. Naraka, an Asura proposed to marry the goddess and was rejected repeatedly. Every time getting the refusal he used to torture the innocent villagers. At this situation, the goddess set a condition, where Naraka had to develop a staircase from the hill’s bottom till the top. But the task was to be finished before the dawn.  The Asura accepted the challenge. As she suspected him feeling up to the test, she trickily made a rooster make the sound before the first light. Hearing the crow, the demon gave up his task at a glance. As he came to realize the treachery he moved out. He killed the bird and that is the place where it is currently known as Kukurakata. This is the reason for the tradition behind sacrificing roosters being carried on in the temple.

It is our duty to abide by and take care of our deity. Nonetheless, it is not that during this time, the Goddess turns to be unholy or untouchable. The Indians believe that at that time, the mind of Goddess is sunken in Yoga Nidra. Moreover, people must arrange a lonely surrounding for the mother and must be aware that there must be no such behaviour that makes her feel disturbed. Further, the devotees should be concentrating more on Japa (chanting) and Dhyan (meditation) and it can bear more fruitful outcomes. However, this must not be done loudly. Apart from that, the land for agriculture should not be scratched or hit with the plough then. Besides, shaving is also prohibited and a self-controlled life is to be lived. Since she takes care of us throughout the year, hence, we must also keep on paying attention to her- and let her blessings bring wellness to everyone.

Now let me end with another interesting tale in this context. In this narrative, from the responses of Shiva, in his conversations with Parvati, reference is there about repeated birth and death of the goddess. This indicates the lack of stability or eternality of the Shakti. This type of negative implication has always been there towards Shaktism bagged out by the Shaivites. Once, Shiva and his wife Parvati were hanging out for refreshment on the bull.

At once, the goddess asks after, “O Lord of the Lords, why do you wear the garland of human skulls? How can you smear the ashes on your body? What makes you to stay as Digamvara (naked)? And, why do you beg for food?”.

“Hold on”, the man calmly argues down, “Listen dear! The memories of all the time you have sacrificed your life happily, drives me to break away and spread the ashes on my parts. The break down compels me to get up with the skull-ornaments and carelessly move out to beg, losing all my interest in this material world. Now you better tell me, what is the use of clothes for a person who does not mourn, lacks any shame and lives the life of a dedicated Yogi?”

The explanation made the women angry. Angling for her own capabilities, she pointed out to a red-coloured river with her finger. Seeing the bloodcurdling stream of blood, Shiva’s mind got shaken up. To be after the mystery and realize the unknown, he started to concentrate his mind through meditation. Nevertheless, his attempt was in vain. He surrendered to his wife to understand the theory.

“Think over”, the female laughed out and revealed, “Whenever I give birth to Brahma, Vishnu and You, my blood of delivery has been flowing that way since then”.

The words lighted up the man. He started praying to her.

“Narayani replies with a smile. She explains “Hari Har and the PadmaYoni- every time I give them birth, the blood flows like a river till then. Hearing that Hara was surprised. While praising her, composes the Noutan Geet”.