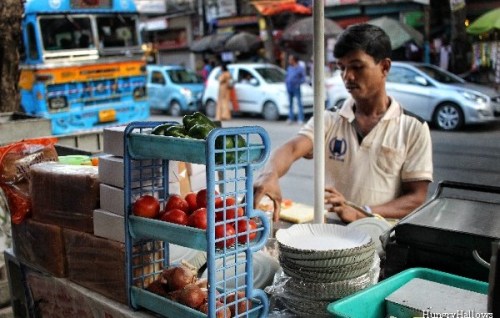 Two doctors and a psychologist- what does this equation add up to? Well, in any other part of the world, under any other circumstances, you would perk yourself up for an imminent punchline. But in our good ol’ Calcutta, this combination of mind and body has taken the shape of something absolutely fantastic.No, not a Nobel Prize -winning -discovery team, but something more I guess. Well, they have teamed up to form the Hungry Hallows- an A-team of foodies who dare as far as their adventurous palates will take them. This time around, Calcutta Walks takes you on a ‘Thrifty Eat All You Can Date’ with the Hungry Hallows, who take off time from their day jobs to don the superhuman capes of adventure gourmets, right here on the streets of the City.

The self-donned challenge of the Hungry Hallows team was to sample different fare on the street and sometimes off it,all on a shoe string budget. It seemed a task at hand, but as you journey on this culinary voyage in the City with them, the discoveries are priceless- almost literally as well. This also proves QED- Calcutta is one of the most food friendly cities of the world!

The area chosen for this challenge was the famous ‘Boipara’ or College Street area of the north, which boasts of several universities, colleges and bookshops.Food for thought never did work without Food for the Stomach, so it figures why there are myriad eating places here.

street foo served out best- on the street!

The first stop was the YMCA Canteen located at the corner of College Square near Presidency College.
Quoting the Hungry Hallows Team here – ‘A tiny place with no seating, this place is a gem when it comes to hot wholesome food at pocket friendly prices! We love the Chicken Stew at this place. Carrots, beans, potato, soybean chunks, papaya, potato with a healthy chunk of chicken swimming in the clear broth of a stew. Polish it off with toasted bread. Slurp. All this for Rs.50!’

Coffee House in College Street has long been urban legend featuring in song, film, book and nostalgia that accompanies any mention of Calcutta.But hidden in its time tested predictable menu are two items that are worth a venture according to our friendly food guides.

The Chicken Afgani , with her humbler partner the Samosa and that cup of Coffee from Coffee House.

The Chicken Afgani,a calorific dish with a fried chicken cutlet in a sweet and hot gravy with a potato wedge for company is both filling and satisfying. HH recommends we use bread to cut through the richness.The pocket gets lighter by Rs. 65 for the Afgani.

For the ones not so hungry, the Singhara priced at Rs 10, makes for sweet satiation of light hunger pangs.

Calcutta has maybe three days of winter- no, we are kidding but the winters are mild and temperate here. So thirst is our constant companion. The juice shop off  the crossing of BB Ganguly Street and College Street is a good place to stop. This place is famous for its Mango shake (seasonal) served with sandesh (freshly made cottage cheese sweetmeats that are a Bengali specialty)  and dry fruits on top for Rs. 25! Refreshing and not too sweet, a great drink.

You also get a real good Orange Juice and Pineapple Juice. The cold coffee of this place for 25 bucks again is worth trying as well, opines the team.

The team then narrowed down on a street vendor opposite Goenka College selling delectable sandwiches and rank its fare very highly in terms of quality and hygiene. Avra, Ankur and Shamoita declare unanimously that the Grilled Veg cheese Sandwich is by far its signature.

‘Fresh veggies, molten cheese, grilled to perfection and served with fries and ketchup. Warm gooey goodness for Rs. 30’- that’s the way this stall is rated and noted diligently in notebooks brought along.

Tibetan cuisine is an popular choice of street food . GPS would probably not show this as a marked location but the HH team sniffs up a roadside shop (near the Central Metro Station- Shivaji statue gate), and they opine – ‘this guy sells the freshest Momos in the area! Priced at Rs. 20 a plate for 8 pieces of chicken momo with soup, he sells out like crazy. There is always a huddle around his shop.Sure they are not the best momos, but sure are tasty, hot and fresh. You even get half a plate for 10 bucks!’ 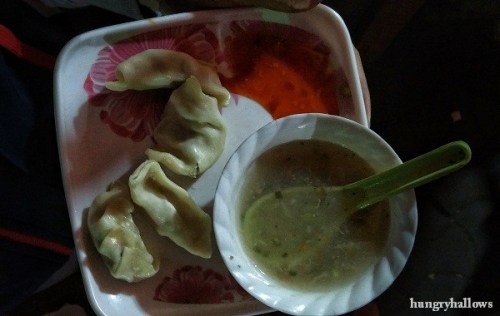 Calcutta’s favourite momo with the bowl of clear soup

Calcutta has its genre of street food- it serves up multi-national cuisine with the unique Calcutta-twist to it! So do not expect your sandwich to taste European or your Chilli Chicken to be predictably Chinese!

We at Calcutta Walks believe that conversations over food and of food are everlasting. So come join us on our varied food trails whenever you are up for a whole lot of Calcutta served out in your plate !

Meanwhile that day the buck literally did not stop there, nor did the savouring… but for more do check up the Hungry Hallows post for all details :

Acknowledgements: Explorer Preeti is heavily indebted to the team at Hungry Hallows- Avradeep, Shamoita and Ankur. It has been a real pleasure 🙂

Read more about this amazing team on their website http://www.hungryhallows.com

All pictures used in this post have been taken by the team.