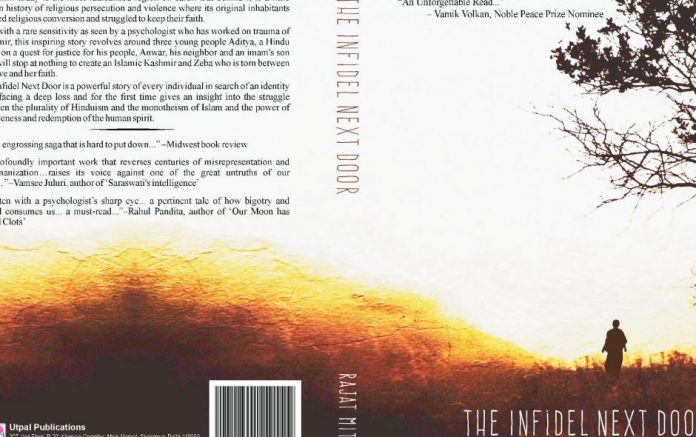 “Memory is now our only tool against the falsification of history” says Aditya, the protagonist of the novel “The infidel next door” when the judge asks him to bring evidence for the atrocities committed against his people who were killed in mass violence.

This statement has a Kafkaesque similarity to the observation of the Supreme court judge who asked of the petitioner how will he find the evidence for the crimes committed more than twenty seven years ago against the victims. The judge after calling the crime gut wrenching dismissed the petition saying it is too late and admonished the petitioner for why he didn’t come earlier. None of the major newspaper made any coverage of this news. Who cares if there was a mass violence perpetrated against a hapless community and now their children and grandchildren are asking for justice.

The petition was made by Roots in Kashmir. To ask them why they didn’t file a petition earlier overlooks a tragic point. Many of them were not born in 1990. It is when they came to age they felt the injustice done to their families.

There is another reason. After a genocide, it is the rarely the first generation who go in search of justice. It is usually the second or the third generation who does so. Psychologists have wondered about this curious phenomenon and found several possible reasons why the first generation doesn’t do so. The first generation is seen to be burdened with coping and survival of the race that has been uprooted. That doesn’t happen in a day and often that takes a long time, nearly a generation or two. In addition, they are burdened with a shame that they couldn’t protect themselves and their loved ones and feel humiliated with the realization that they are at the mercy of a world that doesn’t care. That there is a hard reality that no one will stand up to speak for them. “The silence of the world who watched is deafening to the survivor”, as a survivor from Auschwitz once remarked. Alone, left to look after one own self, the first generation decides safety comes before justice. They understand that trauma affects the totality of a race’s relation to itself whether it can survive or not. The sense of time gets distorted with the future being a vague nebulous entity that has no meaning and all the concepts that gave it a meaning and held it together become fragmented and fall apart. When even normal everyday things like career, birth and death, marriage, a normal life span one is not sure of, where does justice come in the picture?

It is the second or third who rises above that concern of their elders and tries to undo the injustice. The process takes nearly twenty to thirty years even more. No society should be held responsible as being passive or guilty in not raising an issue that threatened its identity. It needs to be understood.

There is another irony that is apparent here to me. Is it the victims’ or the survivors’ responsibility to collect evidence from the perpetrators? By doing so are we not doing a cardinal sin of victim blaming again saying it is you who should have been alert and quick to collect all the evidence against you even if you faced certain death? Is it not the state or the perpetrators who should be called and asked where were you? I wonder.

In a society where a survivor stands up and asks for justice, the survivor shouldn’t be ridiculed or asked why did you not come before. He needs to be asked what gave him the courage to ask for it now and given the assurance that the institution would look into it. If we can’t, our system doesn’t exist for the survivor. It exists for the perpetrator.

In almost all cases of mass violence throughout the twentieth century, the mention of evidence provokes derision in perpetrators and helplessness in the survivors. Yet for every human rights defender and every prosecutor who works with survivors of mass violence, knows that the battle for justice is a battle against lack of evidence that starts in the immediate aftermath of the crime because the perpetrator begins to wash it away even before the crime is over. Those who question it have a rudimentary knowledge of the criminal psyche.

The problem of evidence doesn’t lie in a temporal distortion or lapse of time. It also doesn’t lie in whether a single person was killed or it was many who were done to death. Respect for evidence is minimal in the minds of those who are supposed to uphold it. The Jessica Lal murder case or the Arushi Talwar case. When evidence is given scant regard in trial after trial so the survivors know that they have no chance against a system that upholds the rights of the perpetrators more than theirs. A criminal justice system therefore which asks the victims ‘why did you not come earlier for justice’ is itself guilty of many a promise it has failed to keep.

For those of us who criticize the timing of the petition as too late and not according to legal parameters of the day perhaps fail to see that in asking for justice by the second generation lies a central element of healing in all incidents of mass violence – the hope and promise enshrined in for future generations who will never forget. At this moment, with this petition being rejected this hope and promise for a race to find justice lies shattered on the ground.

Bruno Bettelheim, a world renowned psychologist once said,”What cannot be talked about can also not be put to rest. And if it’s not, the wounds continue to fester from generation to generation.”