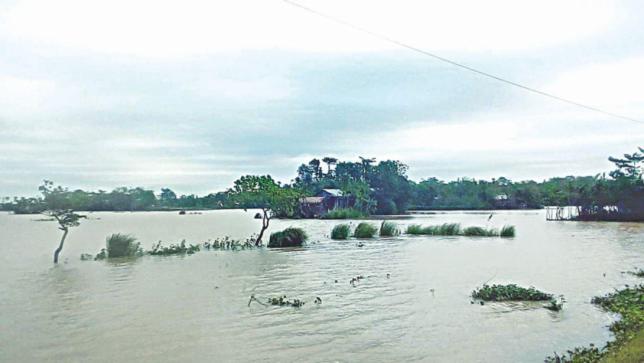 Dam after dam gave in to the unseasonably early rainfall in the Haor area (a floodplain depression in the Northeastern region) of Bangladesh. Desperate farmers watched helplessly as the onrush of water submerged their crops right before harvest. Millions of Haor farmers lost all of their livelihood to incessant rainfall and flash floods in Sunamganj, Netrakona, Moulvibazar and other adjoining districts.

While we can sit and debate the legitimacy of climate change, these farmers face a situation of life or death.

Bangladesh, a relatively new nation state, upgraded recently from a “basket case” (remember Kissinger’s dismissive term?) to a test case for development agencies in the past few decades. Bangladesh, today, is also a laboratory for climate change experiments of sorts. Despite prevalent natural disasters, the government and thousands of development agencies have neglected to implement any effective, long-term solutions. Looking at the reports of overwhelming unpreparedness of the government and the local authorities, one cannot help but wonder what we have really achieved.

Special warning systems were not built to forecast flash floods in a flood-prone area like this. Farmers complain that most of the dams tore to pieces due to the negligence and shameless corruption associated with building and maintaining these embankments. Heavy siltation in the rivers and unplanned illegal developments in the lowlands have only worsened the situation. The authorities’ fortifying the last few operational dams after much of the region was already flooded did not offer much respite.

Haor is a mono-crop region with unique land and weather patterns. For their annual livelihood, Haor’s inhabitants depend on planting one paddy crop. Typically, flash floods strike the area in late April – after the paddy is harvested. But this year, heavy rainfall and the floods came weeks early, right before the harvest began. Haor’s residents cannot remember the last time floods struck so early with so much devastation.

The farmers could barely process one calamity before another occurred: the water’s pH levels rose, killing the fish in Haor. Farmers who raised ducks suffered as ducks died when the water became contaminated with submerged paddy. When these desperate farmers simultaneously rushed to sell their cows, prices fell, and farmers could no longer sell their cows for substantial cash.

Local media has been featuring dead fish and ducks floating on the water along with people like Tara Banu, who committed suicide after watching her livelihood wash away. Tara Banu was an example of the much talked about ‘resilience’ in the ‘global south’ (believe it or not, it is a well established term to refer to the third world countries) – she had begun farming years ago to make ends meet after her husband became disabled.

Many of these poor farmers took loans with the anticipation that they would pay them off after the harvest. Now, they have no idea how they will pay these back while they struggle to feed their families through the year. The government initially agreed to distribute rice and very little cash to affected farmers. The Prime Minister, finally, announced that the interest on the bank loans would be halved and fertiliser, seeds and other agricultural components would be distributed for free. But farmers and activists agree that this measure will not provide farmers with the means to live until the next harvest season.

Demands, from the farmers and the activists have risen for the Bangladeshi government to declare Haor an “affected area,” so proper relief distribution can start immediately. However, the government refuses. It was hard to believe when one of highest Bangladeshi government officials said that the only way Haor could be declared an “affected area” was if half the population died! (http://www.dainikamadershomoy.com/todays-paper/editorial/75705/).

As a universal political tactic, the government has also been criticising the media for exaggerating the losses within the region.

Natural calamities like these have long lasting repercussions. Many of these farmers will be displaced permanently as they default on their loans or are forced to sell their land. Many seasonal labourers come to work in these paddy fields from other parts of the country during the harvesting season – they will be out of a job for now. For millions of people in Bangladesh, who live on less than a dollar a day, this is a big blow to their means to survive.

Millions of people get dispossessed from the rural areas on a regular basis. Every time a severe natural disaster occurs, displaced villagers swarm into city centres with hopes of joining the nation’s industrial workforce. Many research and development institutions – as well as the Bangladesh government and World Bank – assume that dispossessed rural populations can be absorbed into export-led businesses, such as the garments or frozen shrimp industries.

However, the reality is, there are not enough jobs to support these displaced populations. It will be impossible to absorb this influx of new labour when even the existing factory workforce cannot be accommodated properly. Recent reports say more than 40 percent of the surviving workers of the collapsed Rana Plaza building are still unemployed. How can we absorb more dispossessed people into these industries while the existing labour force has such a hard time finding work?

But the problem in this particular Haor region is much deeper. The Haor area sits in the south of the Dauki fault which runs from east to west in the Shillong Plateau. Geologically, the region is sensitive to shifting as the Indian tectonic plate drives north; the Shillong mountain rises and the plain below subsides, which will cause more flooding in these areas. Some reports say that unseasonable flooding (not as bad as this years’ devastation) has been more common in recent years. The fault has also been identified as a potential zone for future earthquakes. Climate change manifests in significant increase in the magnitude and variability of rainfall and temperature, more frequent occurrences of floods, cyclones, storms and droughts. Researchers also worry about the acceleration of melting of the glaciers on the Himalayas, which contains the third largest body of snow after the Antarctic and Arctic.

Decades of development projects, triumphing high interest micro credits in the ‘global south’, might have successfully stopped the people’s movements for structural changes, provided us with the ‘feel good’ talking points and a romantic satisfaction of doing ‘something’, but at the end of the day, it has done very little to solve the overarching problems.

The Bangladesh government proudly showcases its GDP growth which is an excellent numeric indicator to make headlines. But, it does very little to deal with the ever growing inequality, dispossession, gross human rights violations, minority oppression, rise of religious fundamentalism and massive corruption.

But, do we really want to address the broader questions of poverty, dispossession through natural disasters and climate change in a planetary scale at this critical juncture of human history? In order to do that, we will need a holistic understanding of the problem with a scientific approach and a sincere investment plan with a long term vision. Meanwhile, adequate warnings systems must be developed, legitimate relief programmes should be administered alongside implementing practical adaptation programmes for these farmers. And, we will need an accountable government to administer that. The burning question is, how do we do that?

Justicia has fallen- What’s next?