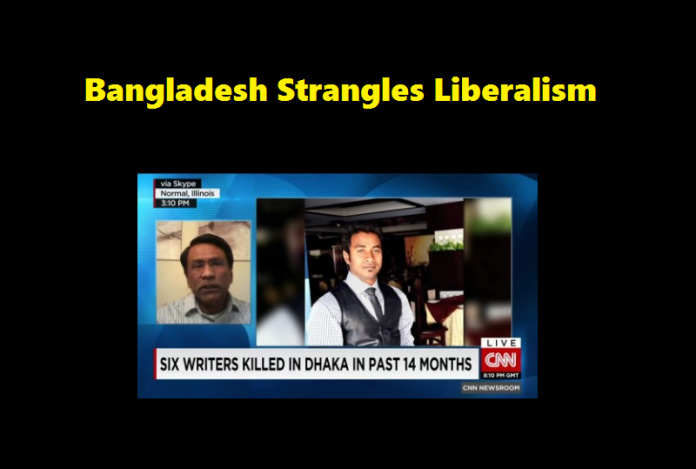 Only a few days back, Janab Hasanul Haq Inu (Minister of Information, Government of Bangladesh), came forth with startling information. According to him, Bangladesh, at the moment, is close to a massive terrorist onslaught thanks to the presence of (almost) 8, 000 Islamic extremists (trained under Osama Bin Laden) across the country. Alleging the presence of a brawny, coherent network between autocratic military personnel, indigenous extremists and global terrorist network, he explained how Bangladesh is involved in a dangerous battle against all these.

Nevertheless, after all these expressions of despondency, the minister was found to have confidence on the governance along with security agencies to inhibit this nasty design of establishing Khelafat across Bangladesh. He ended the meting with press stating, “None can remain completely secured. We have adopted all measures so that terrorists can’t repeat Brussels and Paris-styled attacks in the Bangladeshi soil”.   “I have fought against terrorism for the whole of my life. I had undergone harsh training, during the War of Liberation, in India and led a battalion of 10, 000 guerilla warriors. We would inflict the greatest defeat on terrorism in Bangladesh”.

This is Bangladesh, at the moment, and contrary to the belief of any Indian confiding historical facts of how India helped in its creation, following a protracted, violent struggle of 9 months. Hindu Bangladeshis had expected the emergence of a new Bangladesh, bathed in sacrosanct ideals of liberation, where the minority would be at par with the majority; the fallacy crushed (with a bang) within the alleged secular reign of Sheikh Mujibur Rahman himself.

Despite a popular grievance, a general amnesty was shown to Bengali Muslims who had joined the Pakistan Army willingly. For example, Lieutenant Colonel Firoz Salahuddin, responsible in recruiting Razakars (private army to help Pakistanis in the war), remained with Pakistan till the end of battle but was rehabilitated in the Bangladeshi Army and rendered higher designation, later on. According to pundits, this grave error reinstated the scourge of Islamic fundamentalism in Bangladesh, witnessing nadir by now.

Meanwhile, the ascension of Awami League and its formation of government in 2011 without a popular mandate invited criticisms from across the globe but as Bangladeshis suggest till date, the overwhelming support of India (ruled by Congress then) proved to be the greatest benediction for Sheikh Hasina in this regard. Not only the Hindus but activists of liberalism also expected that the Awami government would be true to its pledge of retaining secular spirit but the later developments proved to be otherwise. The chronicle of establishing International War Crimes Tribunal and death sentence to Abdul Quader Mollah on December 12, 2013 divided the nation into two extensive, incompatible groups and the protest that had commenced in Shahbag and countered by Islamists throughout Bangladesh through arson and violence show no signs of ending yet.

Not only the execution of Abdul Quader Mullah, leader of Jamaat-e-Islami, on December 16, 2013 at 10 pm inflicted one of the worst persecutions on Hindus and other minorities in the recorded history, it added a fillip to the scourge on liberal Muslims, especially Muslim bloggers, that had already initiated with the horrific murder of Jafar Munhsi and Rajeeb Haider in the earlier months of same year following the annunciation of Mullah’s death sentence in February, 2013.

It’s worth mentioning, Rajeeb, hacked to death by machete-wielding men in the Mirpur area of Dhaka, was one of the most prominent faces in the Shahbag protest demanding exemplary punishments of Islamists supporting Pakistan in 1971 and taking part in crimes against humanity. This brutal execution, to be precise, opened a floodgate to a series of exterminations unabated till date.

What has been the response of Bangladeshi Government?  If people and media are believed, it is lackadaisical. Despite a few people with strong links to Islamic terror groups and liable for murders have been put behind the bars and some bloggers have received police security, Bangladeshi press and media term it as tokenism. Contrary to expectations, a few bloggers have also been arrested allegedly for defaming Islam along with closing down several websites by force.  Human rights organizations term this as government’s best endeavor to appease Mullahs for political benefits. The emergence of Bangladesh Awami Olama League, hard-core Islamic religious outfit affiliated to reigning Awami League, and its efforts to outmatch Jaamat in gratifying Islamist aspirations do authenticate the worst apprehension.

How far the apathy of governance goes is proved from the recent statement of Janab Asaduzzaman Khan, Hon’ble Home Minister of Bangladesh, where he dubbed Israel as responsible behind the spate of murders of bloggers and minorities. And just after a few hours of this statement an aged Hindu priest named Sri Gopal Ganguli was hacked to death at Mahishadanga area in the district of Jhinaidaha; the crime has been claimed by IS.  While, as per Bangladesh Hindu-Bouddha-Christian Oikya Parishad (Council) 262 incidents of minority persecution took place in 2015, it’s more than 500 in the first 6 months of 2016 and Islamist cadres of Awami League are found to perpetrate most.

Where does Bangladesh go from here? To many, if preemptive measures are not adopted before long, Bangladesh would become the next and perhaps more violent edition of Afghanistan within the next decade.