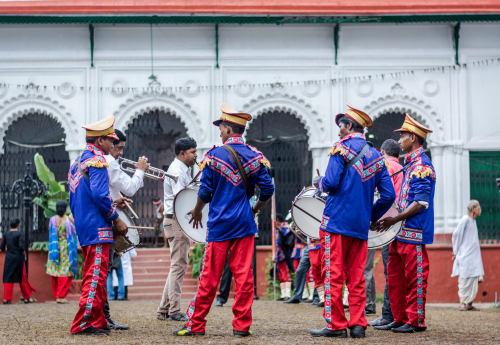 Everyone living in this city has a similar memory I believe- a humid summer afternoon, languor hanging heavy in the air, suddenly disrupted by the unabashed loudness of a marriage procession, the band belting out the latest Bollywood chartbusters, to which men (mostly) of all shapes and sizes, gyrate as an expression of their undiluted joy at the impending matrimony. The groom is the man of the hour, in a ceremonial carriage drawn by tired horses, and the long retinue of celebratory relatives follow. But the music playing itself out is what the memory is all about- the familiar sound of the marriage band of the city. The timbre of that sound was so distinct- the sharp edged clarinet, the tooting trumpet, the pompous presence of the ‘brass’ and of course, the rattling rhythm of the drums. A motley crew of musicians in garish uniforms, with silver gold braids and lined trousers play out song after song, while we gaping children and adults lined the balconies with curious eyes.

These childhood visuals often repeat themselves in our adult lives as we catch sight of these typical Calcuttawala bands- who are still very much a part of all that is typically the City.

On an exploratory walk with friends, I decided to look up the famous Mahboob Band of the city, as an archetype of the bands here. We were in for a surprise because nothing online had given us any clue that there would be four such bands with the same name! We ultimately found ourselves being guided into the ‘office space’ of what was claimed as the ‘authentic Mahboob Band’. Looked upon initially with curiosity, mingled with obvious hesitation to speak, we managed to settle ourselves into the long seat on one side of this tiny space, they call the booking office. But Calcuttans will be Calcuttans, and soon, with our Hindi ranging from the poetic to the ridiculous, we managed to actually carry on a hearty conversation mainly with two very obliging and forthcoming gentlemen-
Mohammed Wasim, grandson of the founder of the original Mahboob Band, and Barkat Hussain, who seemed to be the man on the job for bookings and deals. In fact, when the conversation would dip ever so slightly, to register the pause before the next question, Barkat Hussain would pipe in- ‘Ask, ask, what else do you want to know?’

Mahboob Band is supposed to be the oldest band of the city- set up as far back as 1942, by Mahboob Alam, the grandsire of the present generation that now runs this business from four different office spaces. The four sons, apparently, thought it better to part ways and carry on the family business, using the name that began their story over 70 years ago. Mohammad Wasim identified himself as the son of the second of the four sons of Mahboob Alam.

The band can comprise as many as 50 members but only 12 members are sent at a time as a band of musicians. Interestingly, the band members are mainly sourced from Bihar, where in their village- Biharsharif, there is a musician who imparts training in the different instruments to willing young men, who seek better financial opportunities in this city. They come to the city, like many others did before them, to make money and melody. They are all housed literally on the premises in the lanes of the bizarrely congested Mahatma Gandhi Road, practise their art under the watchful eye of the Band Master, a position currently held by the much revered Muhammad Mukhtar Saheb (a cordial man who made a brief appearance and then disappeared to read his namaz for the afternoon prayers). Incredibly, the musicians do not ‘read’ music; it is all picked up based on their fine-tuned hearing of songs!

An interesting point of conversation was the instruments themselves. There were some glass shelves lining the upper walls of the shop, filled with shining but used instruments-namely the trumpet and brass. We got to know that Meerut is the hub for procuring these instruments, and also the uniforms of the band members. They were unaware of any place in West Bengal itself that sold these instruments.

Mahboob Band has also travelled on outstation calls- to places like Hyderabad and Visakhapatnam. Delhi’s Ziah Band was an obvious favourite mention among other national bands they see in their field of work. ‘Music has no competitors’, declared Muhammad Wasim philosophically, implying that one could not compare among bands objectively.

Another interesting fun fact was that their business was apparently running on calls from Bengali weddings, where they were treated with respect and invited to dine as well- a gesture they appreciated although it meant a little less remuneration in comparison to the dos of the other communities that use their services.

Like many other traditions of the city, this business is also threatened by the uncertain future that lies ahead. With the next generation not keen on taking up this business, and increasing use of technology (read DJs and recorded music), the band faces a future it does want to deal with right now. So very fatalistically, Barkatbhai, gestures to his forehead and says it is all fate, what lies ahead no one knows. And we all smile, silently acknowledging the practical wisdom of this man. He himself has been learning to play the Shehnai for some years now, taking up after his now- deceased father. But one cannot help but notice the well concealed sadness in his eyes, when he enacts how his daughter reacts to the music on returning from school- she shuts out the music her father is playing, by blocking her ears with her hands.

Studying their faces, listening to them speak, we hear another melody playing itself out beneath the words and smiles- a difficult symphony of lives striving on different paths towards the basic human goal of survival. Travelling away from village and home, making sense of this overwhelming city, and constantly jostling to keep one’s head above water is a lot to deal with. But they do it all, as they have been doing it for ages…performing the melodies which always do not play out so well in their own lives.

Every city is a multi-sensory feast. Sights, sounds, tastes, smells, touch – all are powerful memory triggers for the way we remember a place. In this regard, Calcutta dishes out an unlimited-eat-all-you-can buffet that is not for the faint hearted.
You need to take up her challenge and dig right in to savour her spread.

But what is the Sound of my city? It is not just the persistent futile honking on her congested roads; neither is it the cries of promised revolution in the half-hearted vociferousness of her political processions; nor solely the songs of the Bard playing out at traffic signals while lovers whisper cautiously in stuffy cabs with misty panes. It is also the music that resounds from the legacy started ages ago in a city with a strong colonial hangover.

Acknowledgements: I would like to thank all my photographer friends who chipped in so generously to share some amazing photographs of the bands!

Do not play with our kids future

Langadu- a national shame for Bangladesh